As KCR Takes Oath as Telangana Chief Minister, Controversy Over His Cabinet 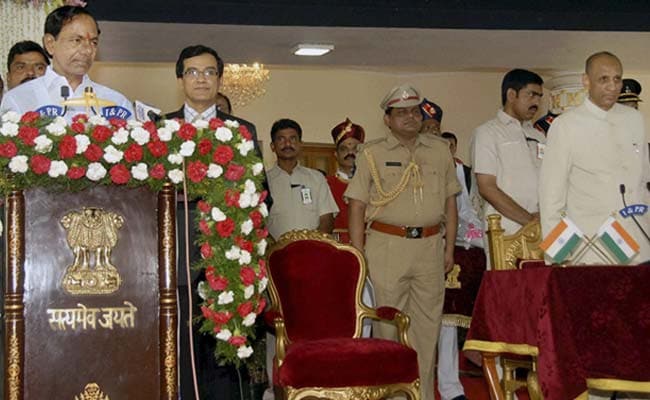 Mr Rao was sworn in along with 11 ministers in the presence of enthusiastic workers of his party, the Telangana Rashtra Samithi and several VIPs. However, Telugu Desam Party president N Chandrababu Naidu, who will be chief minister of the residual Andhra Pradesh, did not attend. (Telangana is Born: A Timeline)

That was not the only detail which caused eyebrows to be raised. Of Mr Rao's 11 ministers, two are members of his family - his son KT Rama Rao and nephew T Harish Rao - and there are no women.

KCR's ministry also has four Reddys, three members of other backward classes or the OBCs, a Muslim and a Dalit.

The inclusion of his son and nephew and what is being seen as a skewed social representation in his ministry exposed the new chief minister to charges of nepotism. His son, who will be a Cabinet ranked minister said, "Definitely it is a criticism, and we will have to silence them with our performance."

Mr Rao Jr, who is popularly called KTR, also said, "Don't judge us too early. The full-fledged strength (of the cabinet) is 18. An expansion will take place and all issues will be addressed."

He said Mr Naidu had been invited to attend Monday's oath ceremony, but failed to show up. "Definitely there was an invite that went out, but for reasons better known to him Mr Naidu chose not to attend," KTR said. (Andhra Pradesh Minus Telangana: 10 Facts)

The chief minister's nephew too will hold a Cabinet rank. The lone Muslim in the ministry, Mohammed Mahmood Ali, and the Dalit face, T Rajaiah are likely to be made deputy chief ministers.

Promoted
Listen to the latest songs, only on JioSaavn.com
ESL Narasimhan has been sworn in as Governor of both Telangana and the residuary Andhra Pradesh. The two states will share a Governor and Hyderabad as a common capital for 10 years. (Also read: This is the Official Song of Telangana)