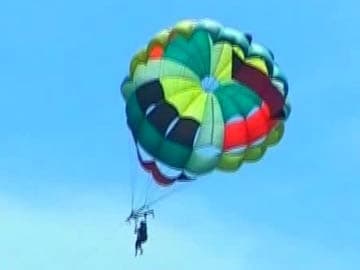 Kannur, Kerala: Ignoring her age, parents of an 11-month-old girl today sent her on a solo parasailing trip to a height of about 40 feet as the toddler was seen crying by onlookers at Muzhipillangadi beach in Kannur.

The child, Niya Nizam, had undergone a month's training, a relative of the toddler told television channels.

Niya was looking disturbed and had been crying, spectators said. The girl's mother was seen rushing to pick up her daughter in her arms and comforting her soon after the event.

Kannur Superintendent of Police P N Unniraja said that he had asked the organisers and parents not to put the child to such a trauma.

"We are looking into the matter and taking legal opinions on whether a case can be registered against the parents and organisers," Unniraja, who also inaugurated the event, said.

He said he had told the organisers yesterday not to send the child on the trip and had hesitated to inaugurate the event today.

The organisers, a private company from Kozhikode, had said legally there was no provision to ban the event, the official said.

Malayalam actor Vineeth, a friend of the family, who was also present, wondered why the media was trying to kick up a controversy when the child's parents had no issues.

Promoted
Listen to the latest songs, only on JioSaavn.com
On May 3, Kannur Collector P Balakiran was injured when his paraglider developed a snag at a height of 25 feet and he fell down.