The department is now trying to figure out if the fish has spread from the pond as it looks to prevent the species from reaching other bodies of water in Georgia, Matt Thomas, Chief of Fisheries for the Wildlife Resources Division, said in a statement 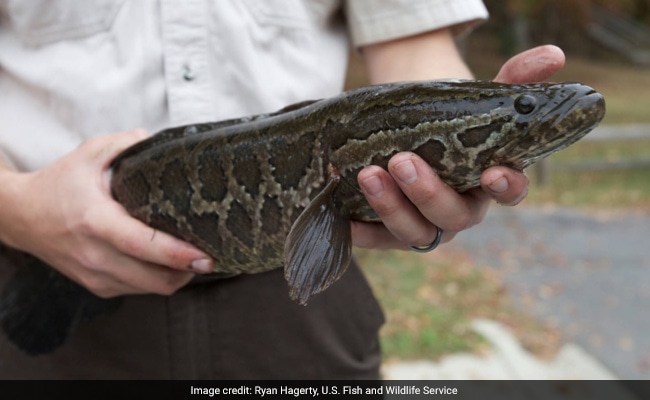 A northern snakehead fish was caught earlier this month in a Gwinnett County Pond, according to the Georgia Department of Natural Resources' Wildlife Resources Division, and it's the first time the species has been reported in Georgia waters, the agency said.

The department is now trying to figure out if the fish has spread from the pond as it looks to prevent the species from reaching other bodies of water in Georgia, Matt Thomas, Chief of Fisheries for the Wildlife Resources Division, said in a statement.

The long, thin fish that looks similar to a bowfin can be harmful to wildlife because it can out compete, or later displace, other species in the water, according to the U.S. Geological Survey. Should the species succeed in establishing more populations of predatory offspring, it could alter food webs and ecological systems that could leave a permanent change to other species in water bodies, according to U.S. Geological Survey.

The northern snakehead fish, a native to East Asia, used to be sold in pet stores, live-food fish markets and restaurants in some major cities before 2002, when the U.S. Fish and Wildlife Service added the species to its list of injurious wildlife.

The sharp-tooth fish was first spotted in the wild in the United States in San Bernardino County's Silverwood Lake in California in 1997, according to NISIC's database. Northern snakeheads have been reported in 14 other states, according to the Georgia Department of Natural Resources' Wildlife Resources Division.

Invasive fish like the northern snakehead are often introduced through unauthorized release, according to Georgia wildlife authorities. In Georgia, it's illegal to import, transport, sell, transfer and have any species of snakehead without a valid wildlife license.

Maryland had the first established population of the fish in 2002, and the state has the largest distribution of northern snakeheads, according to the Maryland Department of Natural Resources. The fish can now be found in every major tidal river of the Chesapeake Bay.

The air-breathing fish are able to draw breath through an air ladder that's similar to a lung, according to the Chesapeake Bay Program. Their breathing ability makes it possible for them to navigate to other small areas of land and new bodies of water. The unique fish can survive up to four days out of water if it's kept moist, and it can remain immobile, but alive, in mud during drought, according to the Chesapeake Bay Program.

The fish can grow up to 3 feet and can weigh up to 18 pounds or more.

The splotchy-looking fish eats other fish, and it has been reported that it will also eat amphibians, crawfish and even small animals such as mice, according to the Maryland Department of Natural Resources.

Wildlife officials in Georgia are asking anglers to learn how to identify, kill and photograph the fish and reporting their catch to the Georgia Department of Natural Resources Wildlife Resources Division Fisheries office.

The fish could also make a nutrient-packed meal, according to research.