What Do Spider Webs Sound Like? This Interactive Performance Shows How

"Spider's Canvas/Arachnodrone" is an ever-changing performance deeply rooted in a collaboration among science, art, technology and a whole other species. 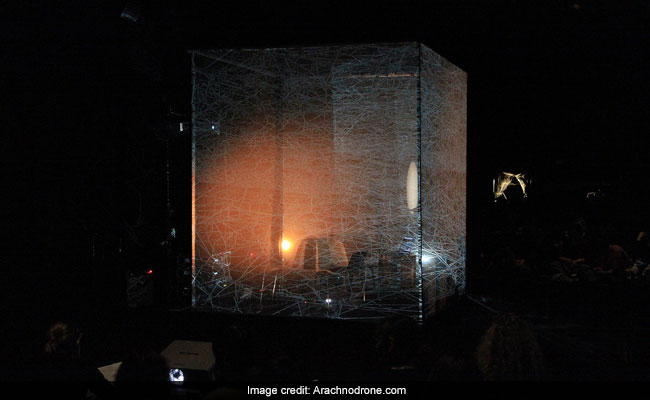 "Spider's Canvas/Arachnodrone" is a sonic exploration of a spider's web

If you've never considered the question, don't stress: Scientists and musicians have. They've created an interactive, multimedia performance that lets you tour a spider-spun web that makes otherworldly music.

"Spider's Canvas/Arachnodrone," a sonic exploration of a spider's web, is the result of a meeting of minds at MIT. The project's collaborators are Evan Ziporyn, composer and faculty director of the MIT Center for Art, Science & Technology; composer/visual artist Christine Southworth; sound artist Ian Hattwick; spider researcher Isabelle Su. Also helping out a bit: a Cyrtophora citricola spider from South America.

The group took laser-scanned images of the spider's web, then associated different parts of the web with different sounds. They were inspired by the intricate, yet tough protein fibers that make up spider webs.

The haunting, abstract music that resulted is paired with a visual component that gives audiences an interactive, spider's-eye view of the web. Su controls the audience's view of the web, guiding them through different components with a video game that serves up the different sounds depending on which part of the web she accesses. It's an ever-changing performance deeply rooted in a collaboration among science, art, technology and a whole other species.

The group isn't done weaving their creative web: In the future, the collaborators will work to give the piece a virtual reality component, too. Catch the first U.S. performances of "Spider's Canvas/Arachnodrone" at MIT's Sounding performance season next month, learn more about the collaboration at MIT News or check out Arachnodrone.com for images and video.

(Except for the headline, this story has not been edited by NDTV staff and is published from a syndicated feed.)
Comments
Spider's Canvas ArachnodroneEvan ZiporynMIT