The Pune district administration had appealed to people above 60 and children below 10 years to avoid coming to the Jaystambh memorial in view of the pandemic. 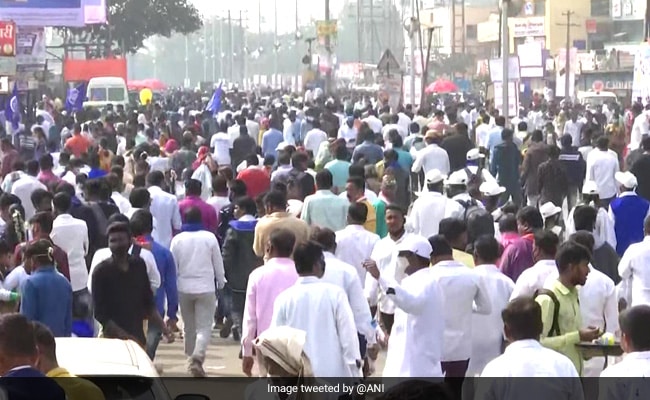 Lakhs of people have visited the Jaystambh pillar in Pune district of Maharashtra.

Undeterred by the rising number of COVID-19 cases and the pandemic-related restrictions, lakhs of people paid tributes at the Jaystambh military monument in Pune district of Maharashtra till Saturday afternoon to mark the 204th anniversary of the Koregaon Bhima battle amid tight security.

In contrast to the 203rd anniversary of the historical battle last year, which was a low-key affair due to the pandemic curbs, lakhs of people have visited the Jaystambh pillar, which is decorated with the insignia of the Mahar Regiment, in Perne village.

As per the Dalit narrative, the Jaystambh is the symbol of the victory over casteism as the British forces that fought the Peshwas at Koregaon Bhima on January 1, 1818, comprised largely of soldiers from the Dalit Mahar community, who waged a "war for freedom" from 'casteism' of the Peshwas, who were Brahmins.

"By this afternoon, the number of people visiting the Jaystambh increased steadily. We feel that going by this pattern, the flow of visitors will continue till 5 PM. Around 200 PMPML buses are plying from various areas in Pune to Koregaon Bhima. Lakhs of people have paid the tribute since this morning. Tight security is in place at various spots," said Abhinav Deshmukh, Superintendent of Police (Pune rural).

The Pune district administration had appealed to people above 60 and children below 10 years to avoid coming to Jaystambh in view of the coronavirus pandemic.

Mr Deshmukh said that the number of senior citizens visiting the memorial is comparatively less.

However, children below 10 are seen accompanying their parents. In normal times, lakhs of people, mainly from the Dalit community, visit the Jaystambh every year on January 1. This pillar was erected by the British in the memory of the soldiers who fought against the Peshwas in the 1818 battle.

Pune district collector Rajesh Deshmukh, Joint Commissioner of Police, Pune, Ravindra Shisve, Abhinav Deshmukh and ZP CEO Ayush Prasad travelled by a PMPML (Pune Mahanagar Parivahan Mahamandal) bus. They interacted with the fellow passengers and took stock of the bus service and other facilities being provided by the administration.

Police personnel are deployed in large numbers near the war memorial. Various facilities are also being provided keeping in mind the coronavirus pandemic, another officer said.

Ahead of the 204th anniversary of the Koregaon Bhima battle, the Pune district administration had issued orders under section 144 of the Code of Criminal Procedure (CrPC) that prohibited putting up hoardings or banners in the villages around the memorial, posting content that can spread rumours, create hatred in communities, posting misleading information on social media platforms.

Violence had broken out near Koregaon Bhima village during the 200th commemoration of the historical battle on January 1, 2018. According to police, "provocative" speeches made at the Elgar Parishad conclave held in Pune city a day before had triggered the clashes.

Maharashtra has seen a sharp rise in new daily coronavirus cases in the last 12 days of 2021.

As many as 8,067 fresh coronavirus positive cases were reported in Maharashtra on Friday, as much as 50 per cent more than Thursday.

The state government, in fresh guidelines issued on Thursday night, capped the attendance at gatherings in open or closed spaces at 50.