Mr Kageri is a three-term lawmaker from Sirsi, a seat he first won in 2008 and defended in 2013 and 2018. He earlier also won three straight elections from the Ankola seat 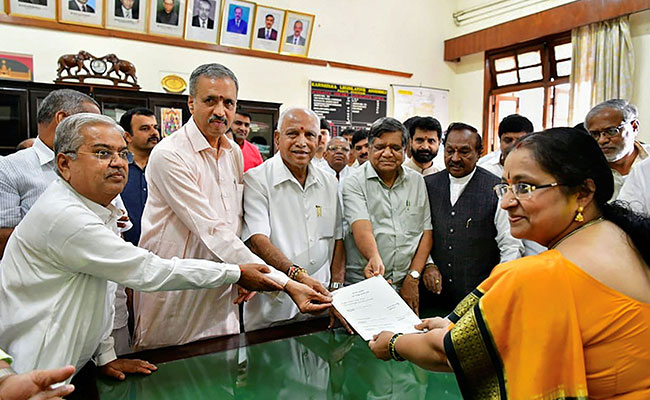 Mr Kageri, 58, was accompanied by Chief Minister BS Yediyurappa when he filed his nomination papers

Last week, the 14-month-old coalition of the Congress and Janata Dal Secular fell after the resignation of 16 lawmakers brought down the majority mark in the house to 105, the current strength of the BJP in the assembly. The Congress-JDS alliance managed only 99 votes.

Vishweshwar Hedge Kageri, 58, who represents the Sirsi constituency in Uttara Karnataka, was accompanied by the Chief Minister and other senior party leaders when he filed his nomination papers on Tuesday.

Mr Kageri is a three-term lawmaker from the Sirsi assembly segment that he first won in 2008 and went on to defend in 2013 and 2018, winning the last election by a margin of nearly 18,000 votes. Prior to this, he also won three straight elections, between 1994 and 2008, contesting from the Ankola seat before it was delimited.

Regarded as a disciplined party worker, the BJP leader was appointed Minister of Primary and Secondary Education in 2008 and held that position till 2013, serving while the state was placed under President's Rule and during the successive governments of current Chief Minister BS Yediyurappa and former chief minister DV Sadananda Gowda.

While serving as education minister, Mr Kageri's attempt in 2010 to introduce changes to the state examination system was opposed by his daughter, Jayalakshmi Hegde, who claimed the new system would make scoring high marks more difficult.

Mr Kageri also served as parliamentary secretary to the chief minister's office between June and September 2007.

He began his political career with the Akhil Bharatiya Vidyarthi Parishad - a youth organisation affiliated to the Rashtriya Swayamsevk Sangh. An influential student leader, Vishweshwar Hedge Kageri rose rapidly through the ranks, holding positions like vice-president of the Swarnavalli Math in his hometown.

Born in Sirsi on July 10, 1961, Mr Kageri holds a B Com from Karnatak University in Dharwad district, and, according to the Karnataka state education department's website, has listed "agriculturist" as his profession. He is married and has three children.