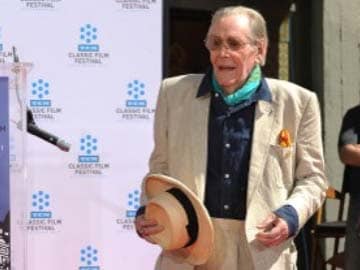 In this file picture taken on April 30, 2011, legendary Irish actor Peter O'Toole attends his hand and footprints ceremony in front of the Grauman's Chinese Theatre in Hollywood, California

London: Famed for his blazing blue eyes and drunken escapades, Peter O'Toole was a giant of the screen and stage whose performance in "Lawrence of Arabia" is often hailed as one of the greatest of all time.

In a career spanning half a century, the Irish-born actor, who died on Saturday aged 81, lent his rich voice to the roles of kings and military heroes, as well as colourful hard-drinkers whose lives were rather closer to his own.

He had characteristically announced his retirement with typical cheerfulness in July 2012, saying it was time to "chuck in the sponge" at the age of 79.

"The heart for it has gone out of me: it won't come back," he said. "I bid the profession a dry-eyed and profoundly grateful farewell."

He had been forced to cut back dramatically on his drinking after a near-fatal illness in the 1970s resulted in the partial removal of his stomach and pancreas.

O'Toole was rising swiftly on the Shakespearean theatre scene when his big break arrived in David Lean's 1962 epic "Lawrence of Arabia".

The starring role, as gallant British army officer T.E. Lawrence, would win him the first of eight Oscar nominations.

"His voice had a crack like a whip," wrote his friend and later co-star Richard Burton. "Most important of all, you couldn't take your eyes off him."

Devastatingly handsome with his piercing eyes, fair hair and flowing Arab robes, O'Toole was apparently once told by the playwright Noel Coward: "If you had been any prettier, it would have been Florence of Arabia."

The son of an Irish bookmaker, O'Toole was born in 1932 and raised in northern England.

After working briefly as a journalist and a radioman for the Royal Navy he went to study at the prestigious Royal Academy of Dramatic Art, in a class that included future stars Albert Finney, Alan Bates and Richard Harris.

Few young actors could have had such an opportunity to shine as O'Toole was given in "Lawrence of Arabia", with its dramatic desert setting.

The next two Oscar nominations came as he played the role of England's king Henry II twice -- first in 1964's "Becket" opposite Burton, and then in "The Lion in Winter", co-starring Katherine Hepburn, in 1968.

Typical of new breed of hellraisers

Both O'Toole and Burton happily admitted that they were drunk for much of the shooting of "Becket", typical of the new breed of hell-raising Hollywood stars.

They were legendary for their wild nights with other booze-loving actors -- O'Toole maintained that he once went for a drink in Paris and woke up in Corsica.

In a memorable television appearance on the US talk show of host David Letterman he entered the stage, dishevelled but snappily-dressed, on board a camel.

Dismounting, he slurred: "Excuse me, but my noble transport is a little thirsty," and gave the animal a can of beer.

"I do not regret one drop," O'Toole said of his drinking career in a 2007 interview with the Guardian newspaper.

"We were young people who'd been children throughout the war -- well, you can imagine what it felt like in 1945 to be free -- not to be bombed, not to be rationed, not to be restricted.

"There was a tremendous amount of enthusiasm. We weren't solitary, boring drinkers, sipping vodka alone in a room. No, no, no -- we went out on the town, baby, and we did our drinking in public!"

The late nights took their toll on his marriage. He had two daughters with Welsh actress Sian Phillips, but they divorced in 1979 after twenty turbulent years together. He had a son with model Karen Brown in 1983.

Despite having to cut back on his own drinking, O'Toole played alcoholics well, winning another Oscar nomination for his 1982 role as a washed-up actor in "My Favourite Year" and further acclaim as a drunken journalist in the stage and TV movie version of "Jeffrey Bernard is Unwell".

He made periodic returns to the stage and remains the holder of the most Oscar nominations without a win.

The Academy of Motion Picture Arts and Sciences gave him an honorary Oscar in 2003 although O'Toole famously almost refused the prize, insisting: "I am still in the game and might win the lovely bugger outright."

Promoted
Listen to the latest songs, only on JioSaavn.com
A final brush with Oscar glory came in 2006 for his portrayal of an elderly actor besotted with a young girl in "Venus".

He was planning to spend his retirement finishing a third volume of memoirs, covering the "meat" of his acting career.