Dharmendra Pratap Singh said he decided to join the SP as the party does not discriminate against anyone and takes everyone along. 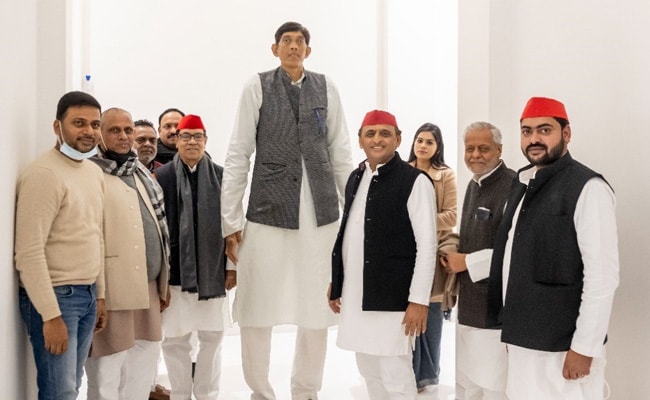 At 8 feet and 1 inch, Dharmendra Pratap Singh from Uttar Pradesh's Pratapgarh has always stood out, dwarfing most others around him and leaving them awestruck.

Now, the former event manager, who claims to be the tallest man in India, is making his political debut with the Samajwadi Party and hopes to help it come out on the top in the upcoming state assembly polls.

Mr Singh told PTI on Sunday, "I will work to take the party to greater heights and dwarf the stature of my opponents. The stature of the rival political parties has already been reduced as a number of their leaders have joined the BJP."

"Whatever duties are assigned to me by the party, I will discharge them to the best of my ability. If the party asks me to campaign for SP chief Akhilesh 'bhaiya', then I will go to Karhal and seek votes for him," he said.

Mr Singh said he decided to join the SP as the party does not discriminate against anyone and takes everyone along.

Responding to a question about the SP having a pro-criminal image, Mr Singh said, "If there are criminals and mafia elements in the SP, then you must specifically point them out. There are people who only spread rumours, and rumours should not be believed. Has there been any party under whose tenure there were no riots?" Asked if he will be contesting the assembly polls, Singh said it is for the SP president to decide.

"As of now, I have just joined the party. As far as contesting the assembly elections is concerned, the decision in this regard will be taken by party chief Akhilesh ji. If he gives me a ticket, then I will definitely contest the elections," he said.

He added that if the party gives him a ticket, he will prefer to contest from the Pratapgarh assembly constituency.

Mr Singh on Saturday joined the SP in Lucknow in the presence of party president Akhilesh Yadav.

The SP tweeted a photo in which Mr Singh, dressed in a crisp white kurta-pyjama with a grey Nehru jacket on top, is seen standing with Mr Yadav and other party leaders.

Mr Singh said he requires double the amount of fabric as compared to a normal person to get a kurta-pyjama stitched.

In a tweet in Hindi on Saturday, the SP said, "Expressing faith in the policies of the Samajwadi Party and the leadership of Shri Akhilesh Yadav, today Shri Dharmendra Pratap Singh of Pratapgarh joined the Samajwadi Party." In a Facebook post, SP's chief spokesperson Rajendra Chaudhary said, "We hope that with Dharmendra Pratap Singh (46), the tallest man of India joining the party, the SP will get strengthened."