The veteran actor made her electoral debut from Mathura in 2014 when she defeated Jayant Chaudhary of the Rashtriya Lok Dal (RLD) by a huge margin. 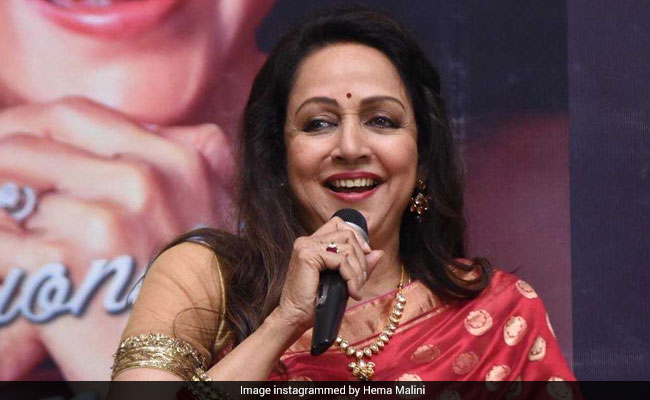 Hema Malini, 70, is the first woman lawmaker from Mathura.

Actor-politician Hema Malini ruled the silver screen in the 1960s and 70s. She was popularly called the "Dream Girl" during her acting years. She is a BJP parliamentarian from the temple town of Mathura in Uttar Pradesh seeking a second term in the 2019 election. She is currently leading from the seat.

Hema Malini, 70, is the first woman lawmaker from Mathura.

Though she formally joined the BJP in 2004, she has campaigned for the party in the past and has served as a Rajya Sabha member between 2003 and 2009.

The veteran actor made her electoral debut from Mathura in 2014 when she defeated Jayant Chaudhary of the Rashtriya Lok Dal (RLD) by a huge margin.

This election, there was speculation that she would be moved to Fatehpur Sikri, but the actor, according to reports, conveyed to her party that she would prefer to contest from the land of Radha and Krishna.

Hema Malini's colourful campaign in Mathura this year generated much interest (and criticism), especially over pictures of her cutting crops with women in fields, greeting people from the sunroof of her Mercede as well as images of her sitting on a tractor.

She defended these viral pictures, and also her record as a parliamentarian, saying she has worked extensively for Mathura in the last five years and visited the city over 250 times.

Hema Malini faces the RLD's Kunwar Narendra Singh, who is the Uttar Pradesh alliance's nominee. A former royal, he has lost two assembly elections in Mathura. His older brother has been an MP from Mathura in the past.

The Congress has fielded Mahesh Pathak, an industrialist who contested from Mathura in 1998 and lost.

Hema Malini, a renowned Bharatanatyam dancer, has starred in more than 200 films. She is best known for her roles in "Sholay", "Seeta aur Geeta", "Satte pe Satta" and "Baghban".

She was born in a Tamil-speaking family in Ammankudi in Tiruchirappalli in 1948.

Her husband, Bollywood actor Dharmendra, too has been actively involved in politics. He was a BJP lawmaker from Rajasthan's Bikaner between 2004 and 2009. This year, the veteran actor campaigned for his wife in Mathura, as well as for his son, actor Sunny Deol who is debuting in this election from Gurdaspur in Punjab as a BJP candidate.