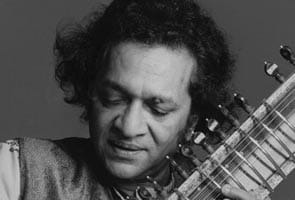 New Delhi: Sitar maestro Pandit Ravi Shankar, one of India's best known contemporary musicians, died after a long illness in a San Diego hospital at the age of 92.

Pandit Ravi Shankar, the younger brother of dancer Uday Shankar, was born Robindro Shaunkor Chowdhury on April 7, 1920. His father was a barrister and a Bengali Brahmin living in Varanasi. At the age of 10, young Robindro went to Paris with Uday Shankar's dance group. Three years later, he had learnt to play various instruments and was a full-time member of his brother's troupe. On tour in Europe and USA and now known as Ravi Shankar, he studied French, Western classical music and jazz.

Sarod player Allauddin Khan, who briefly joined Uday Shankar's group, took the young Ravi Shankar under his wing, taking him to Maihar, a centre of Indian classical music, where he was trained in the traditional gurukul system. Ravi Shankar's debut performance was a jugalbandi playing the sitar with Allauddin's son Ali Akbar Khan on the sarod.

After finishing his formal musical training in 1944, Ravi Shankar moved to Mumbai and joined the Indian People's Theatre Association for whom he composed ballets. He famously re-composed the music of Sare Jahana Se Achha at the age of 25. He then began to record with music label HMV and also joined All India Radio as a music director for several years. While he was with AIR, he jointly composed the signature tune for the brand new Doordarshan. Satyajit Ray's Apu trilogy, for which Ravi Shankar composed the music, gave him a big break in the world of cinema and brought him international kudos.

In 1952, Ravi Shankar and violinist Yehudi Menuhin met and formed a long association. Ravi Shankar first turned down the violinist's invitation to play in New York and sent Ali Akbar Khan instead. Mr Khan received rapturous applause from the American audience after which Mr Shankar resigned from All India Radio and began to tour Europe and USA. Ustad Alla Rakha, father of Zakir Hussain, joined Mr Shankar on the table.

Mr Shankar's records were widely sold and he also started a music school in Mumbai. In 1966, Mr Shankar met Geroge Harrison of The Beatles in London. The Beatle's lead guitarist had already developed an interest in Indian music, using a sitar on the song Norwegian Wood. He then visited India for six weeks to study the sitar under Ravi Shankar. The association with The Beatles brought Mr Shankar even wider international acclaim, and he won his first Grammy, for a collaboration with Yehudi Menuhin, in 1967. The Beatles won a Grammy the same year for their album Sgt Pepper's Lonely Hearts Club Band, which featured the Indian classical music influenced song Within You, Without You.

Ravi Shankar went on to win two more Grammys and will be competing posthumously against daughter Anoushka for another Grammy in 2013. Mr Shankar was nominated for an Oscar for his work on the biopic Gandhi. He received the Bharat Ratna in 1999. He was nominated to the Rajya Sabha by Prime Minister Rajiv Gandhi in 1986 and served till 1992.

Promoted
Listen to the latest songs, only on JioSaavn.com
Pandit Ravi Shankar was married twice, first to Allauddin Khan's daughter Annapurna Devi, also a musician, in 1941.

Their son Shubhendra was born in 1942. The couple separated in the late 1940s. In 1989, he married second wife Sukanya, who's daughter Anoushka he was the biological father of. In 1979, Mr Shankar had a daughter, Norah, with American concert producer Sue Jones. Both Anoushka and Norah are acclaimed musicians. Anoushka plays the sitar, like her father, and Norah sings and plays the piano and guitar.