This Patna 'sabziwala' is an IIM-A topper 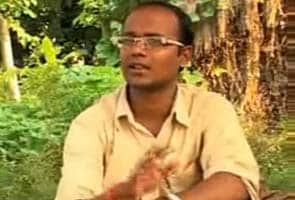 Patna: He is called the 'MBA sabziwalla' and wants to make Bihar India's vegetable hub. Kaushlendra, an alumnus of the Indian Institute of Management-Ahmedabad (IIM-A), is now working towards pre-paid cards for buying vegetables but complains of irritating hurdles that discourage budding entrepreneurs.

Kaushlendra, who refused to join a multinational company like his peers as he wanted to work towards making Bihar a better place, says something as simple as encashing a cheque can take days.

"There are many small things that impede the growth of an entrepreneur in Bihar. We cannot compete with entrepreneurs of other states because other support services come at huge indirect and direct costs," Kaushlendra, a topper of the IIM-A's 2007 batch, told IANS in an interview.

His earlier project of selling vegetables through ice-cooled push-carts became a hit in Bihar and Kaushlendra, in his 20s, now is working hard on his Organised Vegetable Marketing (ORVEM) project to enable people to buy vegetables through pre-paid cards.

But he is unhappy as a cheque deposited three months back has still not been credited.

"A cheque of Rs.20,000 was deposited in my company account three months back and it has not been credited till date. When we inquired Jan 27 and sent a person to the State Bank of India branch in Hilsa in Nalanda district, we were astonished to find they have debited it to another's account Dec 15, 2010. And till date they have not sent the amount to my bank in Patna," he rued.

"They say they'll courier the cheque now, but I'm not sure they will...these small things have ruined many entrepreneurs in Bihar in the past and we do not know whether we will survive this or not," a frustrated Kaushlendra said.

He gave another example of the Madhya Bihar Gramin Bank's (MBGB) Kankarbagh branch in Patna not disbursing a loan amount.

"It sanctioned a loan for nine AC carts to our nine vendors under the government scheme but they are not disbursing the amount...what I have been able to understand is that the bank is looking for some under-the-table dealing that we never do or promote," the bespectacled youth said.

"The bank always procrastinates on this issue. The manufacturer of the cart is sitting on my head and we are finding ourselves helpless," Kaushlendra added.

He wondered how common people in the state manage to get their work done if an educated man like him faced so many problems.

A native of a village in Nalanda, which also happens to be Chief Minister Nitish Kumar's home district, Kaushlendra said he wanted to make vegetables the new brand of Bihar.

Hailing from a farmer family himself, he started his NGO Kaushalya Foundation two years ago and his push-cart was his first venture two years ago.

After topping IIM-A, he did extensive field work -- meeting farmers and studying cultivation techniques -- before he started the project.

Kaushlendra recalled that after doing his MBA, he and his friends and teachers from IIM-A developed a push-cart to make it easy for vendors to carry a vegetable load of up to 200 kg.

He has also tied up with the Agriculture Training and Management Agency (ATMA) to take his dream to vegetable producers in different parts of state.

Kaushlendra said Bihar has an enormous untapped potential for vegetables. The vegetables produced in fertile land near the Ganga river can mark a turnaround for the state if marketed properly.

He recently launched his push-cart service in Lucknow in Uttar Pradesh too and claims pre-paid cards to buy vegetables will help customers avoid the usual rush in busy markets and will also offer additional services.

Promoted
Listen to the latest songs, only on JioSaavn.com
The customers will be able to buy vegetables with the card even if they don't have cash and also get them at slightly cheaper rates.