Just 5 Adorable Videos Of Baby Elephants To Brighten Your Day

World Elephant Day: Playful baby elephants who will win your heart on International Elephant Day, which is celebrated on August 12. 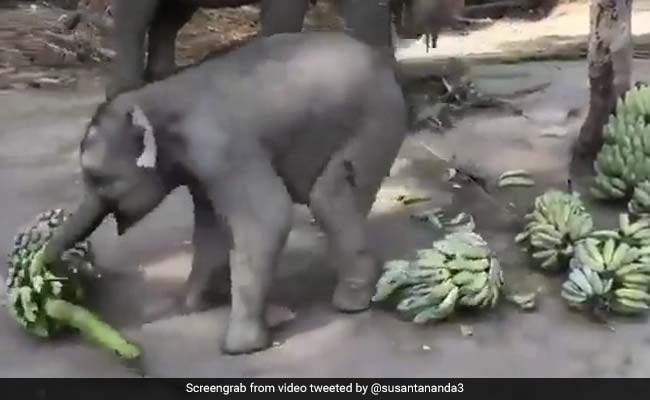 World Elephant Day: A baby elephant goes bananas at the sight of bananas.

World Elephant Day is observed every year on August 12. It is a day dedicated to the preservation and protection of the world's elephants. Also known as International Elephant Day, the goal of this day is to raise awareness about the plight of African and Asian elephants and the threats they face. Elephants are majestic creatures that have fascinated humans for centuries. Videos of these gentle giants have gone viral and captivated the Internet's attention time and again. Though they are found in the wild only in Africa and part of Asia, elephants have won hearts across the world with their playfulness and mischief.

On World Elephant Day, a look at five adorable videos of baby elephants that are sure to bring a smile to your face.

Elephants are known for their playful behaviour - and this video just proves it. In the build-up to World Elephant Day, Indian Forest Services officer Susanta Nanda shared a video which shows a baby elephant going bananas at the sight of bananas. Watch and smile:

They also demand a lot of attention - and how! Watch this adorable video of a baby elephant demanding his keeper's attention:

In this adorable video, a young #elephant affectionately reaches out to the fence painter who plays with the animal. The elephant's playfulness is a treat for the eyes! A great instance of human-animal coexistence. @WWFINDIA@moefcc@PrakashJavdekar@wti_org_india@natgeowildpic.twitter.com/uUaEFTdz8C

In this heartwarming video which has gone viral again and again, a baby elephant can be seen rushing to rescue a man he thought was drowning. Although the incident actually took place at an elephant sanctuary in 2016, Twitter can't stop 'aww-ing' over the adorable old video.

In another video which had recently gone viral online, winning thousands of hearts, a rescued elephant calf named Vedavathi was filmed running behind her keeper at a Karnataka zoo.

And finally - a big baby who just wants to cuddle.

Which video made you smile? Let us know using the comments section.