White Tiger Finds Home In Udaipur Zoo. But He Understands Only Tamil

Rama, a white tiger, moved from the Chennai Zoo in Tamil Nadu to Udaipur Zoo in Rajasthan.

Rajasthan gave a pair of wolves and got Rama in return. Caretakers, however, were worried about how Rama would settle in the unfamiliar territory as he has been brought up in Chennai and responded only to commands in Tamil.

But at his first public appearance today in Udaipur, three weeks after he made the road trip from the Vandalur Zoo in Chennai to Udaipur, Rama barely seemed out of place. He took a few strides and surveyed the public gathered for his 'darshan' in a majestic fashion.

Though Rama was born to a pair of white tigers in the Delhi Zoo, he was moved to Chennai when only a cub. As a result, he understood only Tamil. 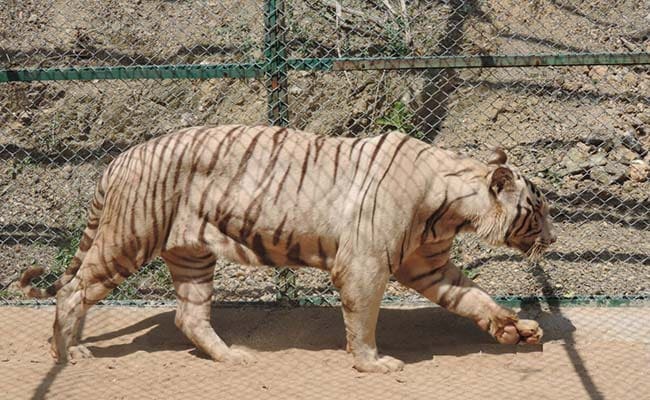 Rama came to the Udaipur Zoo 21 days ago.

"It is the first time in Udaipur that we have a white tiger. We made a special request to the director Chennai Zoo to send his animal keeper here. He also taught a few words in Tamil that are being used to command the animal by the keepers here," T Mohan, a senior forest officer, said.

K Chellaiah, Rama's keeper who came along from Chennai, said he had brought up the animal since he was a cub and it was natural the animal was used to only him and his language.

"But I will help him settle and will only leave after that. I will teach his new caretaker how to look after him," he said.

Promoted
Listen to the latest songs, only on JioSaavn.com
Rama's new keeper Ram Singh said despite his north Indian accent, Rama the tiger was responding to his Tamil instructions.

"I say 'po' which means go out and 'wa' which means come in," he said, adding that eventually he hopes to teach the tiger some Hindi.