What A Bitch, Twitter Tells Shruti Haasan On Her Video. It's A Compliment 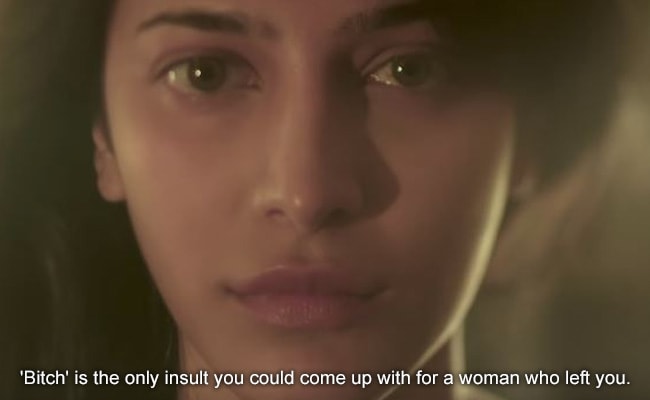 The video, published last evening, has celebrities and Twitter raving.

Actor Shruti Haasan isn't afraid to be called a 'bitch' and is happy to tell you exactly why.

In a two-and-a-half-minute video titled 'Be The Bitch,' Shruti rips into popular perceptions and completely redefines the word as a statement of girl power.

Written and narrated by the actor, the video has been published by Culture Machine's digital channel Blush for their #Unblushed series, which has also featured Kalki Koechlin, Radhika Apte and more recently Amitabh Bachchan.

"Bitch is the verbal eye roll you make to classify any woman who is not your cup of tea because she refuses to pour it," she says in the video. "The bitch is a teacher who stands against a system. The bitch is multitasker and that's why she has no time for your excuses. The bitch is pure ambition with hormones."

Promoted
Listen to the latest songs, only on JioSaavn.com
The video, published last evening, has celebrities and Twitter raving.

The Expression as is!! @shrutihaasan you are Rockstar!! More power to you!! https://t.co/mHvd7ehpwE

What a bitch!!! Nice one @shrutihaasanhttps://t.co/oqjGwHM3za

Love the way this video moves and the way you say it just as it is #BeTheBitchhttps://t.co/352sQeILK7 Grandé @shrutihaasan

Bitch is a verbal eyeroll you make to classify any woman who is not your cup of tea just because she refuses to... https://t.co/6l1pfTKhr7

Love this video your narration and the voice spectacular @shrutihaasan proud to be a fan of yours any day https://t.co/zUdUuO1Mjb

Watch the video below: (Viewer discretion advised. Some contents of this video may be unsuitable for children.)