Watch: This Cow-Dog Pair Has A Beautiful Reaction To Soothing Flute Music

The video shows a man sitting on a chair and playing soothing music on a flute. A cow and a dog were sitting next to him, listening to the music. 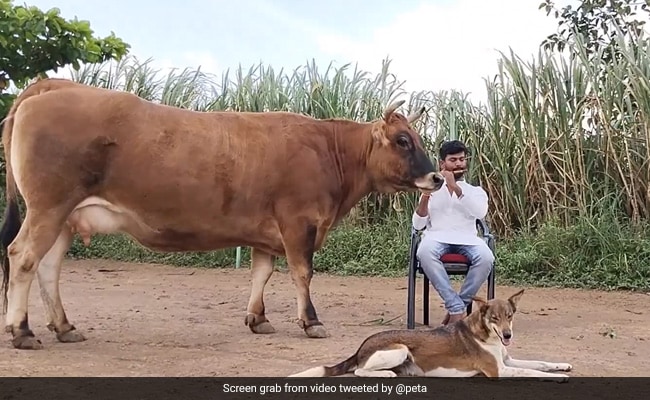 Music always has a positive effect on people; there's something about it that calms both the mind and the body. Several studies and visible evidences have shown that the power of music does not only apply to humans. A viral internet video demonstrates the positive effects of music on animals.

A man sits on a chair and plays soothing music on a flute while a cow and a dog sit next to him in the video. The two animals are shown in the 46-second video listening to flute music and appear to be enjoying themselves due to the relaxing effect of the music.

The video was shared by People for the Ethical Treatment of Animals (PETA) on its Twitter account with a caption that reads, "Take a minute to enjoy this calm and compassionate moment at the #AnimalRahat Sanctuary. Everyone deserves to feel like this."

Take a minute to enjoy this calm and compassionate moment at the #AnimalRahat Sanctuary.

The video was shot at the Animal Rahat Sanctuary. According to its website, the Animal Rahat team is made up of more than 50 dedicated animal-care professionals, including veterinarians, veterinary assistants, scouts, and others who are passionate about working for animals.

The video is popular among social media users, and the number of views is steadily increasing. "Beautiful Animals," one user wrote in support of the beautiful video.

This isn't the first time animals react to soothing music. There are numerous videos on the internet showing animals enjoying music.