As the schoolgirls cross the finishing line, a huge round of applause comes their way from the audience and several students run to congratulate them 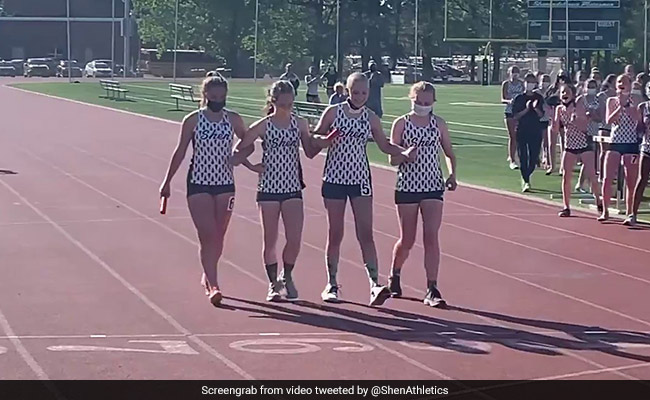 Yeva Klingbeil is helped across the finish line by her teammates in a touching video.

A video of three schoolgirls helping their teammate, who is recuperating from cancer, complete a race in a track-and-field race in New York's Capital District is going viral on social media. Shared by former American professional basketball player Rex Chapman, the video showed three students holding the hands of their teammate, Yeva Klingbeil, and walking by her side to help her complete the 4x1 relay.

As the students from Shenendehowa High School cross the finishing line, a huge round of applause comes their way from the audience and several students run to congratulate them. The students then surround Ms Klingbeil, who used to be a part of the school's cross-country team, and shout her name to praise her indomitable spirit.

Mr Chapman wrote in the caption, “There is nothing like being on a team.”

There is NOTHING like being on a team... https://t.co/ZOYXzG7HSX

The original video shared by the school's athletics programme has received nearly 90,000 views and many said it was a lesson that so many need.

It's a life lesson that so many need. That and working in the service industry

What a beautiful, loving tribute to a teammate. Kids really understand sportsmanship and humanity.

I cried. Not gonna lie.

Go Yeva!!! Nothing better than having great teammates. You'll remember them the rest or your life.

According to a report in wnyt.com, an outlet covering news for Albany and New York's Capital Region, Ms Klingbeil hasn't been able to run since she was diagnosed with rhabdomyosarcoma in the jaw more than a year ago. It was a large mass attached to a nerve in her face. She had been undergoing chemo and radiation therapies but has also suffered some damage to her brain stem and struggles to swallow and even breathe on her own.

Talking about the treatment, Ms Klingbeil had previously told CBS 6 that her family and friends were there “to keep me positive”, and added, “If I wasn't positive, I wouldn't have made it through the year”.

Yeva Klingbeil's head coach Rob Cloutier ran a marathon in November last year to raise money for her medical bills and spread awareness about cancer. He ran from his home to Ms Klingbeil's home.