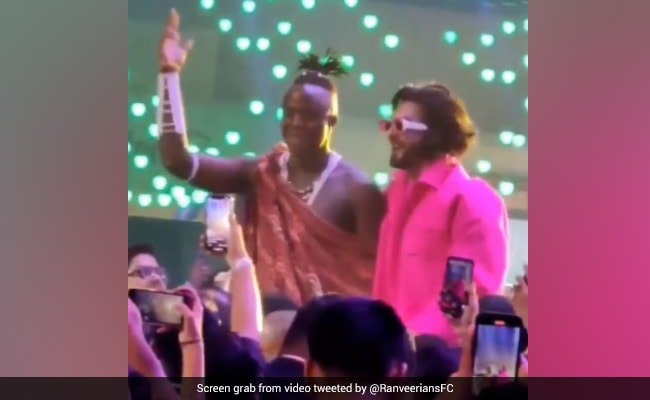 Ranveer Singh made a surprise appearance at the Meta Creator Day event on Friday.

Bollywood actor Ranveer Singh attended an event in Mumbai on Friday and met Tanzanian internet sensation Kili Paul. Several fan accounts shared videos on social media which showed the actor dancing and singing, and even hugging Kili a few times before jumping from the stage to join the audience.

In one clip, Ranveer Singh was also heard speaking his famous line "Kya bolti public" from his movie Gully Boy and singing "Apna Time Aayega". According to fans, the Bollywood star made a surprise appearance at the Meta Creator Day event on Friday.

Watch the videos below:

The Tanzanian content creator is popular for making Instagram Reels where he is seen lip-syncing and sometimes dancing to Hindi movie songs. Recently, he shared a selfie from inside a flight as held an Indian flag and Tanzanian flag. In the caption, Kili wrote, "See u tonight INDIA." After landing in Mumbai, the internet sensation also shared several pictures and videos on Instagram.

Meanwhile, earlier this year, Kili was honoured by the Indian High Commission in Tanzania. He had posted about the award on his Instagram handle. He was also praised by Prime Minister Narendra Modi during his 'Mann Ki Baat' address.

Kili Paul has 4.2 million followers on Instagram and he is followed by popular Indian celebrities, including Anurag Kashyap, Gul Panag and Richa Chadha.