The clip shows an aerial view of the majestic waterfall flowing through hills, nestled in greenery. 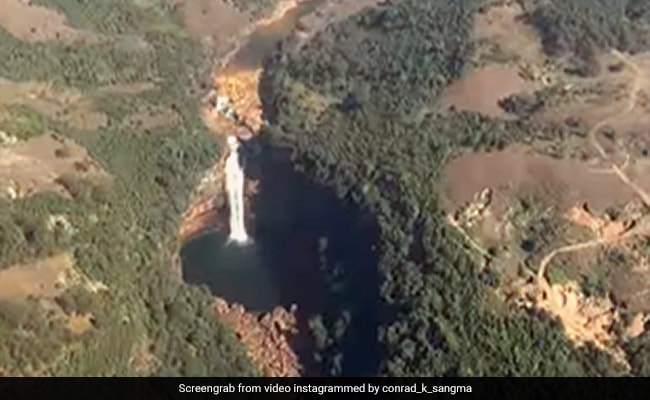 Mr. Sangma later revealed the name of the waterfalls

Brimming with lush green meadows, rivers clear as crystal, pine-covered hills, gorgeous waterfalls, lakes, and majestic forests, Meghalaya is truly a Nature lover's paradise. Pictures and videos showcasing the state's beauty are splashed all over the internet. The state's Chief Minister, Conrad Sangma, also routinely shares stunning posts on his social media handles that highlight his state's natural beauty. This time, he shared an incredible video of a beautiful waterfall while he was flying over Jaintia Hills.

Sharing the video, the Chief Minister wrote, ''Got of a shot of this amazing waterfall while flying over Jaintia Hills ... any guesses which waterfall this is ????''

The clip shows an aerial view of the majestic waterfall flowing through hills, nestled in greenery. While a majority of users couldn't locate the place, a few were able to guess the name of the waterfalls.

In a reply to his own post, Mr. Sangma later revealed the name of the waterfalls. He wrote, '' Yes I think it is PHE PHE falls ... those who got it correct congrats.'' Notably, Phe Phe Falls is a two-step waterfall located in the West Jaintia Hills district in Meghalaya.

The video has been shared about 15 hours ago, and since being posted, the clip has gathered more than 7600 likes and the numbers are only increasing. The video has left internet users mesmerized and many expressed their desire to visit the beautiful state.

Conrad Sangma is the 12th chief minister of Meghalaya. He is the son of P. A. Sangma, former Lok Sabha Speaker and Meghalaya Chief Minister.