The video has prompted reactions from several internet users and celebrities, including Telugu actor Racha Ravi and cricketer Sanju Samson. 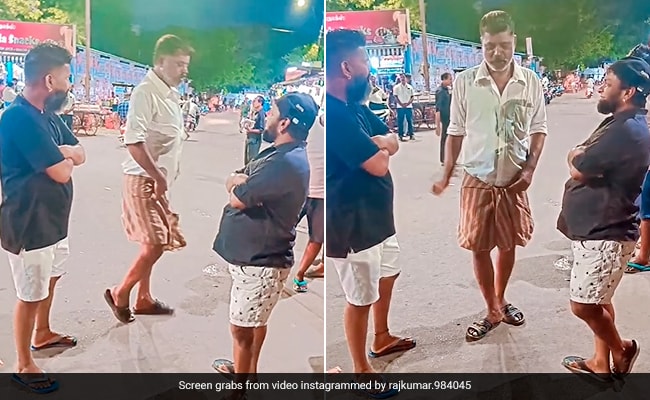 The video has garnered more than 13 million views.

A video of a middle-aged man grooving to the famous song ‘Chikku Bukku Rayiley' has taken the internet by storm. Shared on Instagram just a week back, the video has already garnered more than 13 million views.

The viral video opens to show the man grooving to the song that featured iconic Prabhu Deva from the 1993 film ‘Gentleman'. He is also seen mimicking the steps of the 49-year-old filmmaker-choreographer. “Dancer Ramesh Anna,” read the caption of the post.

Wearing a shirt and a lungi, the man is seen slaying the dance moves on the street. He even does the moonwalk perfectly while his two friends look on with folded arms.

Since being shared the video has crossed more than a million likes as well. It has prompted reactions from several internet users and celebrities, including Telugu actor Racha Ravi and cricketer Sanju Samson. While Mr Ravi reacted with a fire and a heart emoji on the clip, Mr Samson posted a smiling face with an open mouth and ok hand emoji.

“Uncle got moves,” wrote one user. “Age is just a number,” added another. A third said, “A dancer is always a dancer.” “Oh my god. He's awesome,”  commented fourth.

Meanwhile, earlier this week another dance video had gone viral online. In Karnataka, a group of bikers broke into hilarious dance while grooving to the music of a truck's horn. They were seen thoroughly enjoying the pleasant weather with the motorcycles parked on the side of the rain-soaked road. Their nagin dance became an instant hit on the internet, with clips surfacing on Twitter, YouTube and other social media platforms.