The video was shared last year, however, it has now resurfaced again and left the internet in splits. 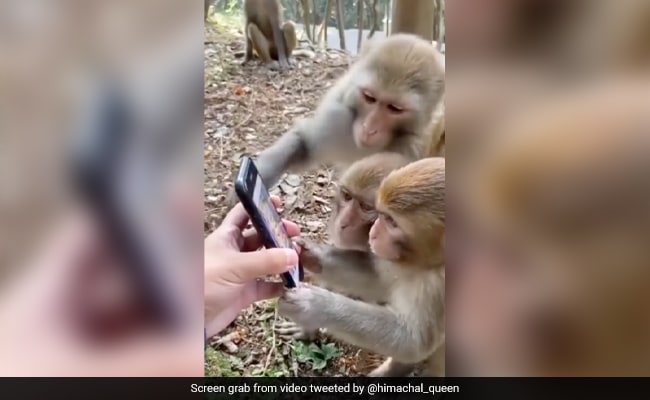 There are many similarities between humans and monkeys. In today's world, while humans are gradually adapting to modern technology, it seems monkeys too are trying to follow the trends. Case in point, a video showing a group of monkeys using a mobile phone like it is an everyday activity for them has surfaced online.

Shared on Twitter, the now-viral video shows the monkeys looking at a smartphone screen and also scrolling through what appears to be a social media account. The video was shared last year, however, it has now resurfaced again and left the internet in splits. The clip has racked up more than 177,000 views and nearly 4,100 likes.

The video opens to show a man holding the phone while two monkeys appear to be engrossed in it. A third is also seen joining in and getting a view of the screen. Moments later, one of the monkeys then holds the phone and starts scrolling the screen in an intriguing way. Another small monkey is also seen pulling the elderly monkey to get its attention and divert it from the gadget.

The video was aptly captioned: “Craze of social media”. It has taken the internet by storm. While some users called the video “cute,” others simply said that the Monkeys too are addicted to smartphones.

One user said, “Hilarious and watch curiosity and facial expression. Aping us.” Another said, “We are spoilt humans, we are spoiling Animals too.” A third jokingly added, “Humans are enemy of humans, they will one day bring this movie ‘planet of apes a reality.'” “Ha ha ha ha ha, the social media effect reached to them also. How seriously monkeys are chatting,” commented fourth.

Meanwhile, another such adorable video created a buzz across the internet earlier this year. In the clip, a dog was seen helping a monkey to steal a packet of chips from a shop by standing on the pooch's back. Internet users were stunned after witnessing the friendship between the two.