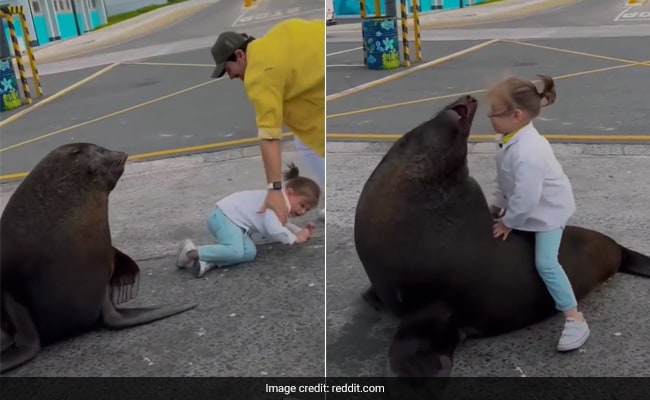 Any animal can sometimes be unpredictable. Domesticated or not, animals can act out when you least expect it. Case in point, a video of a sea lion almost attacking a child has surfaced online.

The short clip was shared on Reddit. It shows a little girl mounting a sea lion so that her parents could record her sitting on the animal's back. However, moments later, the sea lion is seen turning around and almost attacking the kid.

The location of the video or when it was recorded is yet to be known.

The clip ends with the little girl falling on the road. A man, believed to be her father, is also seen rushing to her, picking the kid up and moving her away from the animal.

Since being shared, the video has racked up more than 20,600 upvotes and over 12,000 comments. Internet users slammed the parents for making the small child mount the wild animal.

Viral Video | "This Is Not Niagara Falls": Stunning Video From Karnataka Goes Viral

While one user wrote, “This guy is an idiot, and should be charged with child endangerment,” another said, “I bet you that the parents were upset at the sea lion rather than at their own stupidity.” A third added, “I do feel bad for the kid, you can tell the parents are content hungry, especially when the one just stands there to keep recording.” “How f******* stupid can you be as a parent to let your kid anywhere near a sea lion,” commented fourth.

Sea lions are very calm creatures in general, however, not all interactions they have with humans are very gentle. Last month, a video of a sea lion pulling a little girl into the ocean had gone viral. More recently, two sea lions chasing away a group of people at a beach in the US had also taken the internet by storm.

External ear flaps, lengthy foreflippers, the ability to move on all fours are the distinguishing features of a sea lion. They also have short, dense hair, and a large chest and belly.