The leopard cub was found hiding under discarded banana stems. 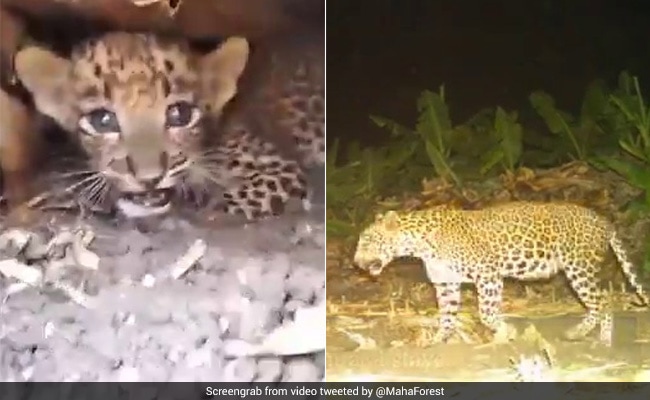 A leopard cub was found in a field in Bhosi village, Maharashtra.

A leopard cub found lost under discarded banana stems in a village in Maharashtra has been reunited with its mother. The forest department in Nanded shared a heartwarming video of the reunion and relayed the story behind it in a now-viral tweet on Thursday.

On April 18, some farmers in the village of Bhosi found the tiny leopard cub hiding under banana trunks. According to the forest department, increasing deforestation and urbanization has forced wild animals out of their habitats and into populated areas. The leopard cub may have found its way to the field as cash crops like banana and sugarcane provide shelter and safety to wildlife.

The forest department,on being informed about the lost cub, began to make preparations to reunite it with its mother. They cordoned off the area and set up multiple trap cameras, which filmed the leopardess arriving at the field at night. The next night, after a health check-up by a vet, the cub was placed in a basket in the field for its mom.

Footage shared by the forest department shows the leopardess visiting the site to carry her cub away. After inspecting the basket carefully, the mother was seen toppling the basket over and leaving with her cub in mouth. Watch the reunion video below:

In 2018, a similar method was employed to reunite four lost leopard cubs with their mother. After being found in a sugarcane field in Maharashtra, the four cubs were placed in a crate, from which their mother carried them away.