New Zealand race car driver Scott Dixon was involved in a fiery crash at the Indy 500 and walked away practically unscathed. 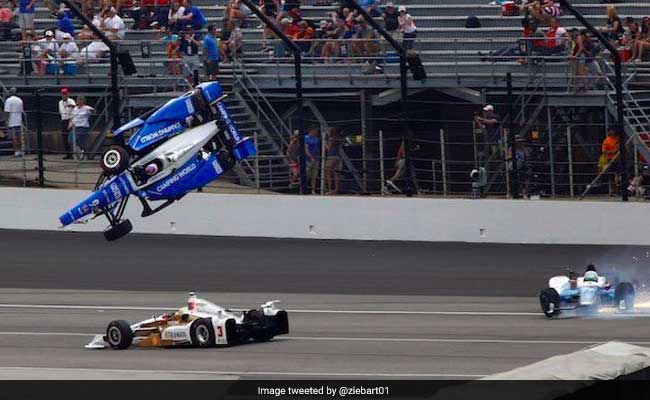 A race car driver managed to climb out of his car practically unscathed after being involved in a fiery crash that brought the Indianapolis 500, or Indy 500, to a brief stop.

Incredible footage of the crash, posted on Twitter, shows the moment Jay Howard's car bounced off a wall, skid and crashed into Scott Dixon's vehicle, sending it airborne. Mr Dixon's vehicle then briefly slid along the safety fencing on the inside of the track. Debris from his car went flying across the race track and flames briefly shot out from its back end.

Oh my god it's incredible that Scott Dixon is OK. pic.twitter.com/2nA1DRIIRo

Both drivers were checked and cleared by medical professionals after the crash.

REPLAY: @scottdixon9 checked, cleared, and released after this turn 1 incident during the #Indy500 at @IMS. #INDYCARpic.twitter.com/gaD950M27F

Mr Dixon, of New Zealand, won the Indy 500 in 2008. This clip shows the crash as it happened from his point of view.

Promoted
Listen to the latest songs, only on JioSaavn.com
This clip is from the on-board camera in the car ahead of Mr Dixon.

REPLAY: The view from @h3lio's on-board camera during the @scottdixon9 incident in turn 1 at @IMS#Indy500#INDYCARpic.twitter.com/fAClTezE41

Mr Dixon took to Twitter to reassure fans of his well-being, tweeting it was a "wild ride."

Thanx for all the messages. That was a wild ride. Bummed for #campingworld. Now onto the Championship.Congrats @TakumaSatoRacer so happy 4 u pic.twitter.com/zFd9Z3fX4Y

I'm elated to hear @scottdixon9 is ok. That was nasty. Everyone was pushing hard from lap 1 today, glad all are safe.