A video is doing rounds on the internet which shows a cat's hilarious reaction on the first day at home. 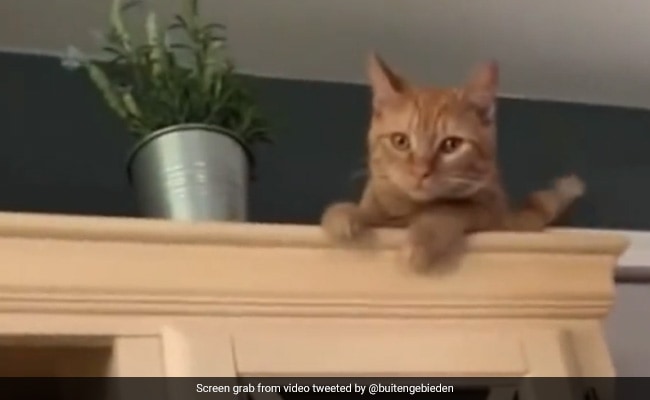 Picture shows the cat perched on the top of a wooden shelf.

A video is doing rounds on the internet which shows a cat's hilarious reaction on the first day at home. The short clip was shared on Twitter on Sunday by user Buitengebieden and since it has accumulated more than 5.2 million views and more than 1.5 lakh likes.

"First day having a cat," the caption of the post read.

In the viral clip, the cat can be seen perched on top of a wooden shelf at home. It can be seen maintaining its patience for a fraction of a second before using its paw to knock down a flower pot that was put next to her.

Since being shared, the clip has taken the internet by storm. More than 13,000 users have retweeted the post and numerous have given heartfelt remarks in the comment section of the post.

"Everyone knows you super glue everything to everything when you get/have a cat," wrote a user.

Another said, "Just testing the law of gravity."

Videos depicting cat's playful nature are widely shared on the internet. A recent viral video of a cat showed how much love it had for its tail.

Shared by an Instagram handle named "Cats doing things on Saturday," the caption reads, "Oh so you hate me?"

The video was originally posted on TikTok by grey and white socks.