While some internet users praised mother nature's astounding creations, others wrote that they are not convinced that the animal was "walking" so effortlessly. 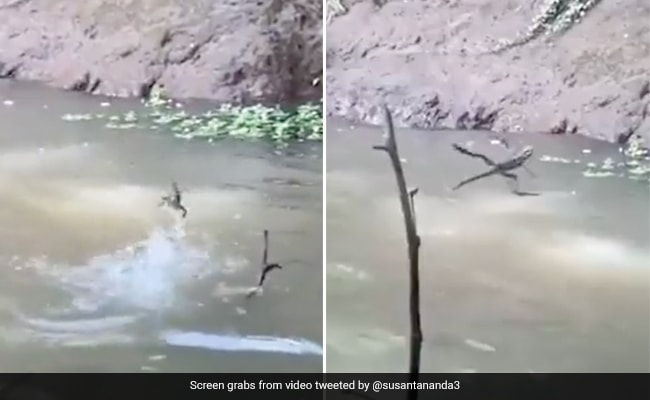 The video accumulated over 30,000 views and hundreds of likes.

The Internet is full of videos that capture the amusing antics of animals. Now, a mind-boggling video showing a reptile walking on water has surfaced on social media and left netizens stunned.

The clip was shared on Twitter by Indian Forest Service (IFS) officer Susanta Nanda. It showed a lizard plunging into a water body from the top of a wooden stick. But instead of swimming or floating, the creature is seen standing in the air and flailing its hind limbs, looking like it's walking over the water.

Internet users were quick to react to the video. While some praised mother nature's astounding creations, others wrote that they are not convinced that the animal was "walking" so effortlessly.

"Mother Nature always has something beautiful to show to her world!" wrote one user. "I'm not convinced that the animals  "walk effortlessly", but it's a great video!" said another.

A third user commented, "Is this lizard called the Jesus Lizard or the common basilisk (Basiliscus basiliscus) found in South America or some kind of Indian species ?" A fourth added, "#Nature amazes at every step of the way. What a remarkable existence."

The video accumulated over 30,000 views and hundreds of likes.

The monster creature was seen staring inside the house with its tongue sticking out. The video amassed 2,76,000 views, over 1,000 comments and several likes.