The cake had a yellow base and green top, just like the utensil washing sponge Scotch Brite. 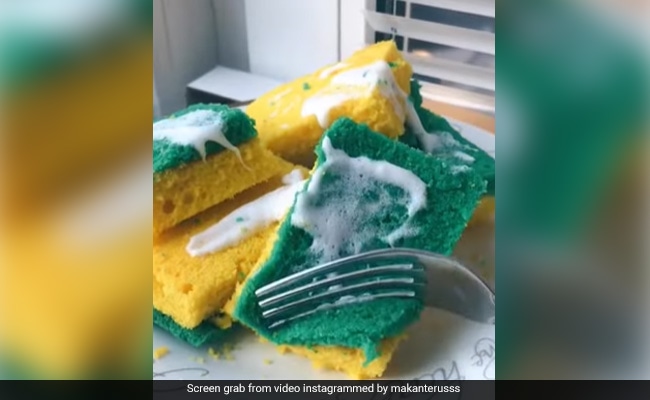 The video has left internet users in disgust.

Recently, hyper-realistic cakes have joined the many food trends that have made their way into the internet over time. These cakes have only gotten better with time, and the unexpected shapes have blown us away. Now, in one such instance, a video of a cake which looked like Scotch Brite has hit the internet and left social media users in complete disgust.

The short clip was shared on Instagram by Indonesia-based food and travel enthusiast Andre Sarwono. The video showed the unusual-looking cake served on a plate. The cake had a yellow base and green top, just like the utensil washing sponge Scotch Brite.

"THIS EDIBLE WASHING SPONGE. Salfok is real . . Well this is one of the cakes that are in the shape of a dish sponge, similar to the original and delicious. Tempting, if you don't know you must think this is the real Washing Sponge," read the caption of the video," Mr Sarwono wrote in the caption of the post.

Since being shared, the video has taken the internet by storm. "No way. That doesn't look good to eat," wrote one user. "Real definition of sponge cake," jokingly said another.

A third commented, "I wouldn't eat it, but I admire the art of the person who made it," while a fourth added, "That looks too realistic".

Meanwhile, earlier, Amaury Guichon, a popular Swiss-French pastry chef, shared a video of the making of a pinata on his Instagram handle with the caption, "Chocolate Pinata! Smashing it was so heartbreaking. But the candies were so good!"

The clip showed Mr Guichon creating the decorated figure and filling it with cute candies. He even hanged the figure to the ceiling using tassels, and at the end of the video, he smashed the pinata with a rod and tasted it. The clip garnered more than 11.6 million views and over 9.7 lakh likes.