A video has surfaced on the internet showing a deer drinking water on a river bank and how it survives after a crocodile attack. 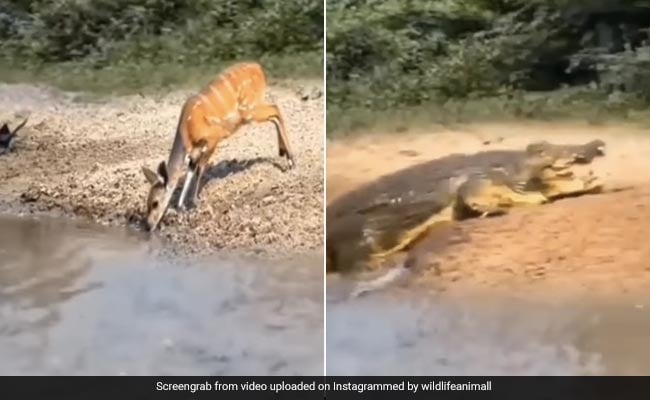 Picture shows a deer drinking water on a river's bank.

There are several videos on the internet that show apex predators hunting in the wild. The majority of wild animals are killed by these strong predators, with only a few luckily surviving. Proving this right, one such video has surfaced on the internet showing a deer drinking water on a river bank and how it survives after a crocodile attack.

Shared by an Instagram page named Wild Life Animall two days ago, the video shows the crocodile trying to be cunning by hunting a deer, but things did not go well for it as the deer can be seen escaping within a fraction of seconds.

In the video, a deer is quietly sipping water from a river until a crocodile ambushes him so the deer don't notice it. The deer, on the other hand, felt the crocodile before seeing him. The deer leapt backwards at the same time the crocodile sprang out of the water to capture him with his formidable teeth.

The crocodile's unexpected attack terrified the deer so much that it appeared as if the poor deer's spirit fled out of his body. The deer's reaction was the most unexpected aspect of the video, even though the crocodile was being stealthy so the deer wouldn't guess his next move.

The video has received over 26,000 views and hundreds of likes.

Videos of crocodiles hunting in the wild are widely shared on social media. Last month, a video of a terrifying incident in which a 16-foot crocodile attacked a wildlife park employee in South Africa who later survived went popular on social media.

The video was posted on Facebook by Wild Heart Wildlife Foundation. The incident took place on September 10 at Crocodile Creek farm in the KwaZulu Natal province of South Africa. The footage of the zookeeper strolling around the crocodiles before sitting on Hannibal went popular on the internet. It was initially shared on Facebook by the Wild Heart Wildlife Foundation.