This is an old video, which was originally posted on Facebook in June last year. It has gone viral again after being tweeted by an IAS officer. 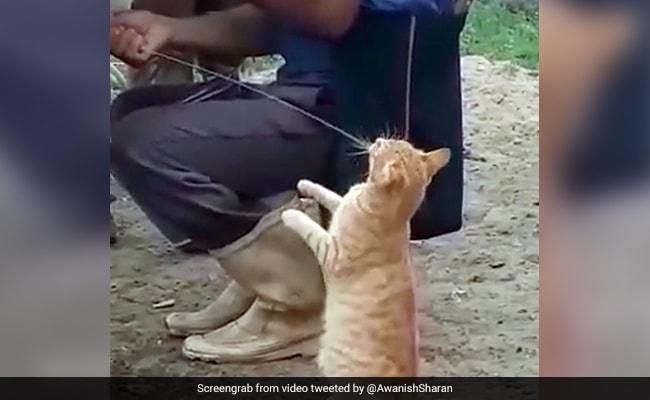 A man milking a cow and a cat standing behind him on its hind legs.

Animals are known to be persistent as well as cute at the same time. And cats rank high on this index. A video going viral on the internet will prove it.

It shows a man milking a cow and a cat standing behind him on its hind legs. After observing the man for some time, the cat pokes him and the man directs the milk its mouth.

The old video has been posted again on Twitter by Avanish Sharan, an IAS officer of Chhattisgarh Cadre with a caption in Hindi which translates to: “Just need to understand everyone's gesture.”

This video has so far received over 26,000 likes and more than 5.7 lakh views. Users have shown their love with their heartfelt comments.
“Love between a man and animal is unconditional,” commented a user.

“Wow it makes my day,” commented another user.

The video was originally posted on the Facebook page Din Cincin in June last year, and a related article showed that the incident took place in Malaysia.

Another video of a cat went viral on social media last month where a kitten was seen insisting his owner to stop gardening and hug her. The video was viewed more than 1.5 lakh views on Instagram.

Video featuring cats are quite common on social media, people like watching them because of their cute actions and friendly behaviour. A video of a kitten playing the Fruit Ninja game on a tablet became popular on social media. The gaming kitten tried to slice all of the fruits on the screen since it didn't want to miss any of them.