The Shivling made of gym equipment is said to have been created by a Gwalior gym owner. 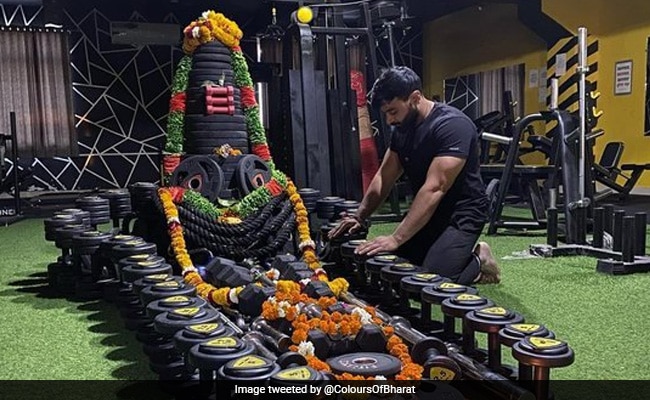 Internet users were impressed with the gym owner's creativity.

A photo of a massive Shivling created from gym equipment is gaining traction on social media. The image was posted on Twitter by a user named Colours Of Bharat. The Shivling made of gym equipment is said to have been created by a Gwalior gym owner.

In the image, a man is seen worshipping the Shivling created using weight plates, dumbbells and ropes. It has been adorned with garlands of marigold flowers as well. A diya (earthen lamp) is also lit up in front of the Shiva Linga.

The Gwalior-based gym owner, who is said to have created the structure, also used three pink dumbbells as the Tripundra - the three horizontal lines on the forehead.

The picture was shared on Twitter on Monday and since then it has garnered nearly 2,000 likes and over 160 retweets. Internet users were impressed with the gym owner's creativity. They flooded the comment section with hand emojis and clap emojis.

One user wrote, "What a combination of creativity, spirituality, divinity and devotee too." Another added, "That's one impressive schlong".

A third commented, "He has immersed himself in Bhakti. This is what Bhakti means," while a fourth simply said, "Shraddha in 'action'!"

Meanwhile, speaking of Lord Shiva, earlier a stunning video showing an aerial view of the "world's highest located" Shiva Temple had taken the internet by storm. The clip was shared on Twitter by Norwegian diplomat Erik Solheim. It captured the 360-degree aerial view of the Shiva temple situated in the mountains completely blanketed with snow.