The stunning clip captured the 360-degree aerial view of the Shiva temple situated in the mountains completely blanketed with snow. 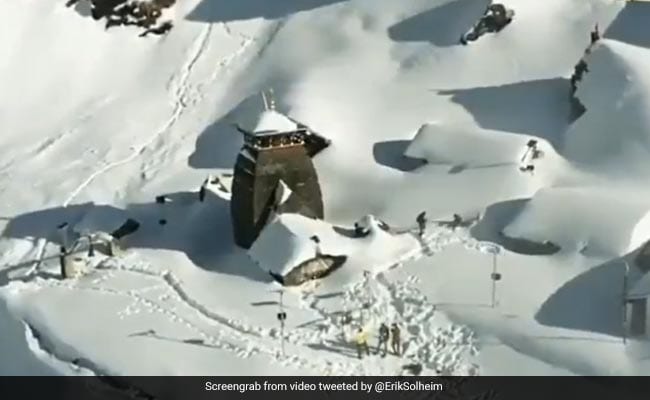 Norwegian diplomat Erik Solheim, who is yet again awestruck by the mesmerising beauty of "Incredible India", recently shared a breathtaking drone video of the Himalayas' highest Shiva temple. Mr Solheim shared the clip on Twitter on Sunday, and since it has accumulated more than 720,000 views and more than 50,000 likes.

The stunning clip captured the 360-degree aerial view of the Shiva temple situated in the mountains completely blanketed with snow. The chanting song "Namo Namo" from the movie 'Kedarnath' is also heard in the background of the video.

The post immediately caught the attention of internet users. While some netizens were simply blown away by the beauty of the amazing view, others, however, pointed out the diplomat's caption might be misleading.

"It's amazing the temple architecture is excellent it survived avalanches and even earthquakes too," wrote one user. "Tungnath Mahadev temple, one of the panch kedar. The trek to the temple is just awesome. Little above is the Chandrashila from where the Himalayan peaks have a 270-degree wide view... incredible India," added another.

A third said, "It is not the highest, and the temple structure is certainly not 5000 years old. It is a beautiful temple on its own; and doesn't need these incorrect adjectives." A fourth commented, "Can't be that old. The present temple was built around the 8th century AD during the times of Adi Shankaracharya. Any prior archaeological evidence would be difficult due to the terrain which is subject to flood and avalanches."

Meanwhile, according to the government site, Tungnath is the highest Shiva temple in the world located at a height of 3,680 meters in the Rudraprayag district, Uttarakhand. The temple is believed to be 1,000 years old.