The video of the incident was uploaded on social media and rapidly became viral, as is the case with all strange incidents in today's digital world. 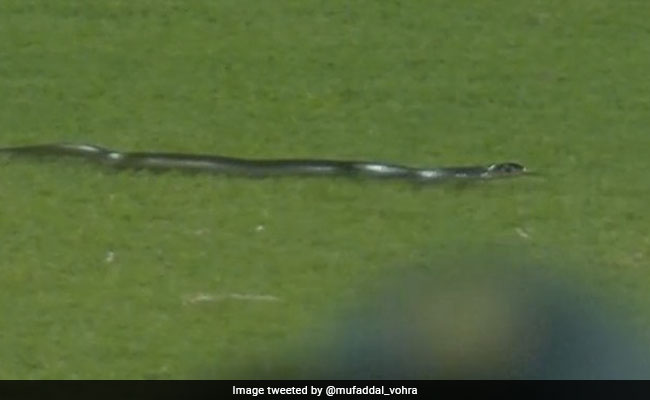 The snake was spotted after the Indian innings' seventh over.

The second Twenty20 International between India and South Africa was strangely interrupted by a snake on Sunday, October 2, at the Barsapara Cricket Stadium in Guwahati. A serpent heading towards the middle of the ground joined the cricketers when they were changing the field placement of the fielders at the end of the Indian innings' seven overs. When the cricket players saw the snake creeping across the field, they immediately alerted the field officials.

The ground crew hurried over with the required tools and quickly took the reptile out. The ground crew's readiness demonstrated that they were aware that a situation like this may occur.

Four men raced onto the cricket field, and all of them looked trained to catch the reptile. One held a snake-catching stick, while the other held a pail.

There have been a number of instances where dogs, birds, cats, and occasionally running nude humans have disrupted games in the past, but with this unusual incident, Guwahati Ground is going down in history.

The video of the incident was uploaded on social media and rapidly became viral, as is the case with all strange incidents in today's digital world.

OMG #snake on playing ground😲😲😲
What is Going on! #INDvsSAT20I#Guwahati#INDvsSA
new audience😂🐍 pic.twitter.com/5PQsqeeR0K

However, David Miller's explosive century went in vain as Indian bowlers held their nerve to clinch the T20I series 2-0 after a 16-run victory in the second T20I against South Africa at Barsapara Cricket Stadium, Guwahati, on Sunday. With the win, Team India took an unassailable lead of 2-0 over South Africa. For South Africa, Miller slammed an unbeaten 106 in 47 balls, while Quinton de Kock played a knock of not out 69 off 48. For India, Arshdeep Singh bagged two wickets while Axar Patel settled for one wicket.

Defending the target of 238, India's Arshdeep Singh dented South Africa's chase by bagging the wickets of Temba Bavuma and Rilee Rossouw in one over.

Aiden Markram and Quinton de Kock then played some careful shots while taking singles to ease some pressure from the team. Axar Patel then gave the Proteas a big blow as he dismissed well-set batter Markram for 33 off 19 balls. South Africa lost three wickets in under eight overs.