The video was shared on Reddit and shows a man casually lying down in the hammock which is tied between the two mountains. 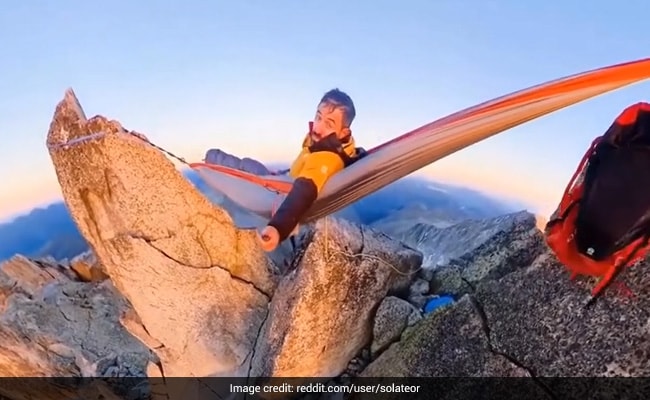 The man tied a hammock at the Pyrenees mountain in Spain.

The internet is full of people doing crazy things to get an adrenaline rush. Some experiences blow other people's minds while others can turn fatal for the one attempting it. In a video that went viral on social media, a man can be resting in a hammock between two short mountains.

The video was shared on Reddit and shows a man casually lying down in the hammock which is tied between the two mountains. The man then records himself doing the activity through a camera. As the video proceeds, we can see the height and steepness of the mountains surrounding him and for someone who has a fear of heights- it's not a sight to behold. The weather appears chilly and one can spot snow on the low-lying mountains.

The short 14-second clip has been captioned as, "Hammock atop the Pyrenees in Spain." The video was shared a day ago and since then it has amassed over 7,800 likes. It has 97 percent up votes as well.

Many internet users were stunned to see the man attempting such an activity. One user commented, "I don't think that being in the hammock would be half as terrifying as getting in or worse, getting out."

"I'm just picturing those cartoons where the hammock keeps spinning and spinning while the person is inside......then, plop!" added another user.

"That's a nope from me. I'm not scared of heights, but I am scared of falling from heights," commented a third user.

A fourth person added, "Definitely still a nope but it brings be comfort how much those cameras distort heights and make everything seem more perilous."

"I just fainted and fell off that mountain," said another one.