"Boogie-woogie" aphids look like miniature woolly sheep as their bodies are covered with glands that produce long, white, waxy strands. 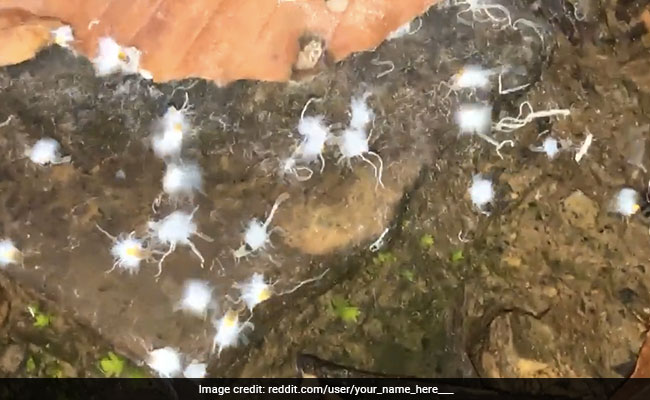 A video showing strange white, furry bugs seemingly dancing around a leaf is going viral on social media. The video, posted on Reddit a few days back, showed the insects - covered in stringy white fur - moving back and forth and waving their hair-like filaments in the air.

"Found some tiny strange bugs dancing around a leaf while hiking. Someone, please tell me what the heck they are? They were on a walking path only around one single leaf," read the caption of the post.

Since being shared, the clip accumulated more than 78,000 upvotes and nearly 4,000 comments. Internet users were left stunned by the sight of the strange bugs. While some explained that the insects seemed to be beech blight aphids, also known as 'boogie-woogie' aphids, others simply called the video "creepy".

"Known affectionately as the 'boogie-woogie aphids,' when a colony of beech blight aphids is disturbed, they'll lift their fuzzy posteriors high in the air and pulse them in unison as a warning to predators," explained one user. "Ew thats creepy," wrote another.

Viral Video | Cat Messes With Wild Deer, Gets Pampered At First But Kicked Out Later

Meanwhile, as per Newsweek, 'boogie-woogie' aphids are found across the United States. They look like miniature woolly sheep as their bodies are covered with glands that produce long, white, waxy strands. Their characteristic "dancing", as seen in the video, is actually a defence mechanism.

"Their waggling warns others of danger, but the young aphids will actually attack and bite potential predators. To do so, they use their piercing mouthparts, a kind of straw they use to feed on sap," explained Francois Brassard, an insect ecology researcher at Charles Darwin University in Australia. Mr Brassard also warned that these dancing bugs should not be touched. If bitten, the waxy strands clog the pharynx of a predator who eventually starves, he said.