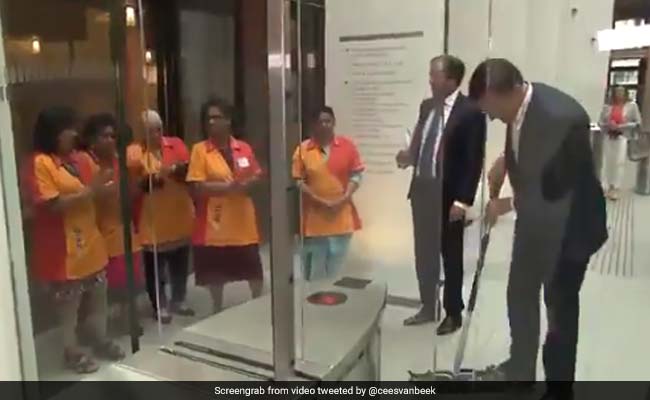 Prime Minister of The Netherlands, Mark Rutte, is being praised on the Internet after a video clip of him cleaning up the parliament floor went viral on Tuesday. The clip shows the leader entering through the security gates of the Dutch parliament and accidentally dropping his coffee. But instead of having someone clean up the mess on the floor, he took the mop and did the job himself.

Promoted
Listen to the latest songs, only on JioSaavn.com
In the clip, Mr Rutte is seen picking up up his coffee cup and then grabbing a mop from one of the staff members. With a big smile on his face, perhaps aware of the presence of cameras, he cleans up the floor without hesitating as staff cheers him on.

Dutch Prime Minister Mark Rutte dropped his coffee cup today in Parliament, then cleaned up the mess himself under loud cheers of the Parliament's cleaners. pic.twitter.com/hHhcP24YHQ

In a longer version of the clip, he even gets a lesson in adjusting the mop to his height from employees - in case he spills his coffee again.

True democracy, true leadership, no luxuriousness, no circle of sycophants and apple-polishers, no protocol, true public servant not ruler, simple & humble style of politics
Dutch PM Rutte accidentally spilled his coffee and then did not hesitate to clean up the mess himself. pic.twitter.com/9MhkX7vAmI

The leader was applauded on Twitter for showing humility and most agreed that other leaders could take some cues from the 51-year-old.

You have to lead by example

I would say he did what was expected of him, regardless of his function.

Honour is earned this way... A lesson for us, a lesson for our so called pro democratic politicians

Though many remained skeptical and wondered if the gesture was just for the cameras.

if they're recording, it's surely a PR.

it may be a publicity stunt, but I still will still pic.twitter.com/jXGf5c8GpV

This, however, isn't the first time Mark Rutte has been commended for doing something not expected from the Prime Minister of one of the wealthiest nations in the world. Last year, for a meeting with the Dutch king, the leader ditched his car and opted to cycle to the palace instead. Bicycles are a common mode of transport in Netherlands but Internet was impressed to see a head of state commute on the humble bicycle.

Our prime minister had a meeting with our king so he biked over and parked in front of the palace. pic.twitter.com/N5X4PXa5ku

What do you think of Mark Rutte's gesture? Tell us in the comments below.Click for more trending news