"She is in a playful mood. Babies belonging to any species are such a joy to look at!" wrote one person in the comments section. 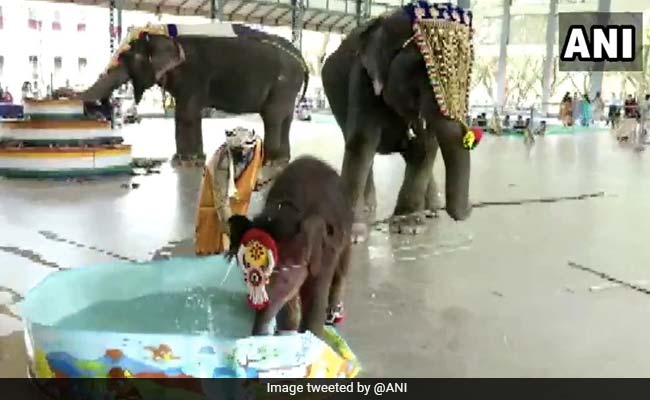 A two-month-old elephant calf was filmed splashing around happily in a tub of water at a temple in Karnataka. The baby elephant was named Shivani in a naming ceremony at Sri Manjunatha Swamy Temple, Dharmasthala in Dakshina Kannada.

A video shared by news agency ANI on Monday shows Shivani - all dressed up for the naming ceremony - playing in a tub of water. The baby elephant was seen splashing around in the plastic tub, wearing elaborate headgear with matching footwear. She was filmed going in and out of the tub that seemed to be collapsing under her weight - leading to a number of amused comments on social media.

According to temple authorities, Shivani was born on July 1 this year. The calf is healthy and loves to play in water - as evidenced by the video below. Take a look:

Since being shared on Twitter one day ago, the clip has garnered over 1.3 lakh views and hundreds of comments.

"She is in a playful mood. Babies belonging to any species are such a joy to look at!" wrote one person in the comments section.

"Just like a one year old human child. Heartwarming!" another said.

Recently, another baby elephant from Karnataka had melted hearts on social media. The elephant calf, named Vedavathi, was filmed running after her keeper at Mysore Zoo in a video that had gone viral on social media, collecting thousands of 'likes'.

"We Pay Our Employees To Leave": Employees On Notice Period Get 10% Hike In This US Company