The video went viral with claims that the huge snake was discovered in FCI Sindri in Dhanbad, Jharkhand. 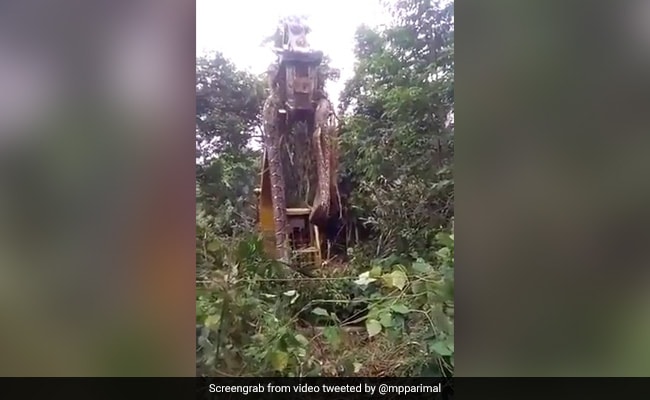 A video that has gone viral online shows a huge snake being lifted out of its rainforest home by a digger. The video has been doing the rounds of the Internet for at least two weeks now, and has left millions stunned at the size of the serpent. Several news articles, in fact, speculated that it could be world's largest snake on record. Since the video surfaced on social media earlier this month, many news websites also incorrectly reported that the snake was found in Jharkhand.

In the Indian social media space, the video went viral with claims that the huge snake was discovered in FCI Sindri in Dhanbad, Jharkhand.

"Massive! It took a crane to shift this #python weighing 100 kg and measuring 6.1 m length, in Dhanbad, Jharkhand," wrote Rajya Sabha member Parimal Nathwani while sharing the clip on Twitter. He was among many who posted the video with similar claims.

Massive! It took a crane to shift this #python weighing 100 kg and measuring 6.1 m length, in Dhanbad, Jharkhand. #nature#wildlife#snakes#forests#India@wwfindia@natgeoindiapic.twitter.com/nZMNUtLkbv

However, according to The Mirror, the snake was found by workers clearing part of a Dominica rainforest. The video was shared on TikTok by @fakrulazwa and has been viewed over 79 million times on the platform. Another video shared on the same account shows people struggling to fit the snake inside a car.

NBT Bihar confirmed that the snake had not been found in Jharkhand. The local administration in Dhanbad clarified that no such snake was found in any part of the district, and nor was there any instance of lifting a snake with a JCB machine.

The hair-raising footage of the large snake being lifted by the crane is therefore not from Jharkhand, as previously speculated, but from Dominica.

According to New York Post, it is not clear what kind of snake the viral video shows, but the boa constrictor is one species native to the Caribbean island. These snakes can grow up to 13-feet.