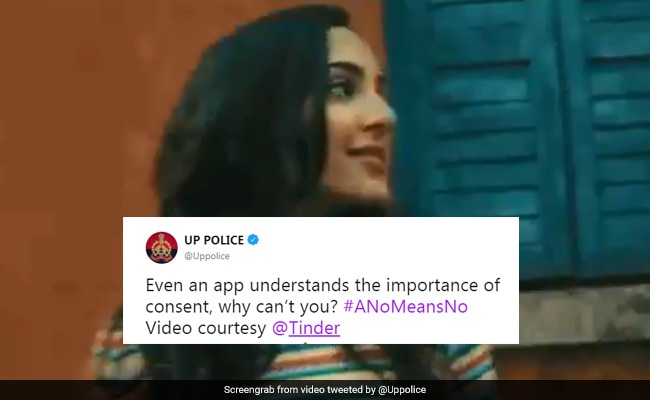 When it comes to using interesting ways to post pertinent messages, Mumbai Police's Twitter account does the job brilliantly. Giving them a tough competition these days is Uttar Pradesh Police's Twitter account. The official account has been posting some incredible tweets to drive home the message of safety and security. One of their most recent tweets is a fine example of that. In a bid to explain the importance of consent, Uttar Pradesh Police posted a tweet that has won over Twitter.

In their tweet posted yesterday, Uttar Pradesh Police has used a clip by dating app Tinder. The video shows a two individuals - while one swipes right (yes, in Tinder terms), the other swipes left. Since they don't match, both walk their separate ways. "It's a match only when both swipe right," says the video.

"Even an app understands the importance of consent, why can't you?" says the tweet posted by Uttar Pradesh Police with the hashtag #ANoMeansNo.

The message is loud and clear. Take a look:

Even an app understands the importance of consent, why can't you? #ANoMeansNo
Video courtesy @Tinderpic.twitter.com/Qc4Y22m2tJ

Since being posted, the tweet has won quite a few reactions from tweeple.

"Amazing concept. Well done guys. #ANoMeansNo," says one Twitter user. "And this is how you use Twitter. Creativity Level: Awesome," says another. "Great initiative by #uppolice, more such initiatives will make a better society," says a third.

Earlier, Uttar Pradesh Police won Twitter's love for their warning against the #KikiChallenge or #InMyFeelings challenge.

Tell us what you think of Uttar Pradesh Police's message using the comments section.