Watch: Tiger Attacks Trainer, Drags Him Across Stage In Circus 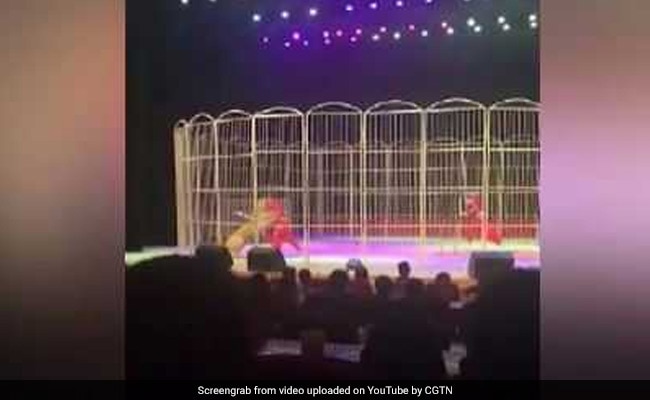 Circus staff said the man survived with only minor injuries

An 'overworked' tiger lost its temper and attacked a handler during a live circus act gone wrong in China's Yingkou City on Saturday. Shocked audience members sat just 2 metres away as the animal dragged one of the handlers across the stage during the show. A short clip of the unfortunate incident has been circulating on social media.

The big cat jumped on a costumed trainer inside the caged arena. As it grabbed the man, a second trainer rushed in and repeatedly hit the tiger with a stick. After a severe beating, the tiger eventually let go of the man and retreated back. Witnesses said the tiger was cruelly hit over ten times before it released the trainer. The trainer survived the attack with no life-threatening injuries, Metro quotes circus staff.

Disclaimer: The following visuals can be disturbing. Viewer discretion advised

The tiger was reportedly forced to perform the routine thrice a day for 10 consecutive days which may have caused the breakdown, South China Morning Post quotes circus bosses. Following the incident, the circus announced that the animal will only be made to do two shows a day.

This isn't the first instance of a circus animal attacking its handler. In May this year, a trainer was left seriously injured after a lion attacked him and grabbed him by the throat.Click for more trending news