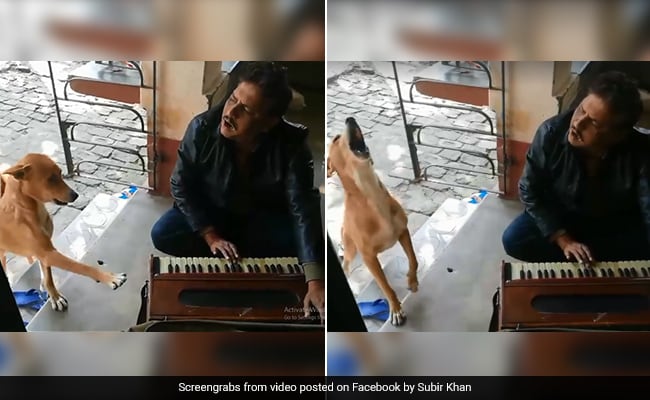 A video of a dog and a man singing together has amused many.

A video of a dog joining his human's riyaaz or music practice is possibly the funniest, cutest thing you will see today. It shows the two joining voices to sing 'Teri Meri Kahani' - a song from the Himesh Reshammiya film Happy Hardy and Heer, sung by Internet sensation Ranu Mondal.

The viral video was posted on Facebook by Subir Khan three days ago. It shows the Barrackpore-resident singing 'Teri Meri Kahani' while playing his harmonium. His dog, named Bagha, stands on the two steps next to him and howls along. Their rendition of the hit song has impressed millions, and people can't stop praising the talented dog.

Mr Khan shared the 30-second clip on Facebook, jokingly urging people not to laugh at it. "Today morning Bagha and I practiced music," he wrote.

The delightful video has been viewed more than 2 million times since it was shared online. It has collected a whopping 59,000 'shares' and 26,000 reactions since it was posted on Facebook, and also been shared by various meme and animal pages.

The video also made its way to other social media platforms like Twitter, where it has left thousands amused.

Dog: Well then I too can and WILL sing...

That human singer is very biased. He could have given small portion of harmonium to dog as well. #Kaliyug

What do you think of this unusual duet? Let us know using the comments section.