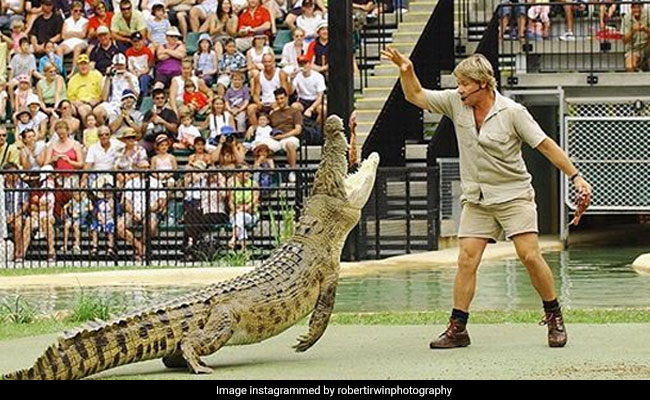 Steve Irwin's son has shared moving photos of him and his father feeding the same crocodile, 15 years apart. Robert Irwin was just two-years-old when his father, beloved Australian wildlife conservationist and television personality, died in a tragic stingray accident. His latest Instagram post proves that the 15-year-old has followed in the footsteps of his wildlife-loving father.

On Wednesday, Robert shared side-by-side photos that feature him and his father in identical poses. Wearing similar zoo uniforms, they face a huge crocodile with a snack in their right hand for the reptile.

"Dad and me feeding Murray... same place, same croc - two photos 15 years apart," Robert Irwin captioned the photo collage. The pictures were clicked at the Australia Zoo, which was founded by Steve Irwin's parents in 1970.

"Can't begin to imagine how proud he would be Robert," Australian TV presenter Lisa Wilkinson said in the comments section. "This is truly everything! Your Dad must be overjoyed to see you literally walk in his footsteps," said actress Emmy Perry.

Both of Steve Irwin's children, Robert and daughter Bindi, have continued to work with animals. Robert is now a wildlife presenter, and starred with his sister and mother in the 2018 reality show 'Crikey! It's the Irwins.'