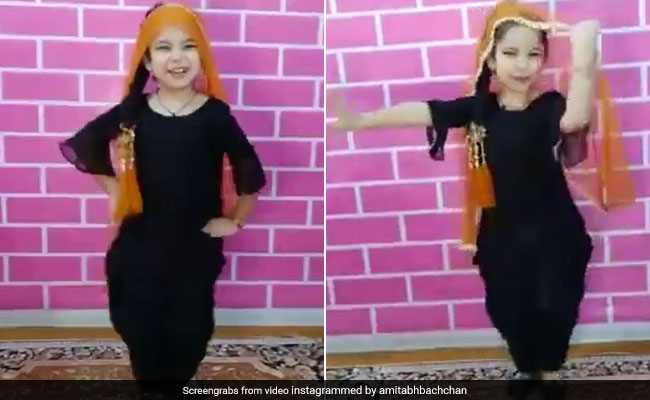 Amitabh Bachchan has shared a video of a girl's performance to a Haryanvi song.

A video of a little girl dancing to a Haryanvi song has impressed Amitabh Bachchan, who shared a video of her energetic performance on social media yesterday. In the video, the girl, dressed in a black suit with an orange dupatta, delivers an impressive dance performance to the song Apne Sasure Ke Aage.

With some killer steps and expressions to match, the young dancer managed to impress not just the superstar but millions of other viewers who saw the video after Amitabh Bachchan shared it on Instagram and Twitter. Halfway through the almost three-minute-long performance, the girl loses one of her shoes while performing a particularly enthusiastic step. That doesn't hamper her performance in any way. She continues without missing a beat - earning an appreciative comment from Mr Bachchan.

"Untrained talent .. simply astounding," the Zanjeer actor wrote while sharing the clip. "Juttinikalgai but the show must go on," he added, concluding his caption with clapping-hand emojis to applaud the performance.

Since being posted on Instagram Tuesday, the video has garnered over 1.8 million views and thousands of comments praising the dance performance. It has also been viewed over 4 lakh times on Twitter.

This is not the first time that Big B has promoted young talent on social media. Earlier this week, he also shared a viral clip of a three-year-old learning classical music from his father.