"Child Is The Father Of Man": Big B On Viral Video Of Boy's Classical Lesson

"Child is the Father of Man!" wrote Amitabh Bachchan while sharing the video. 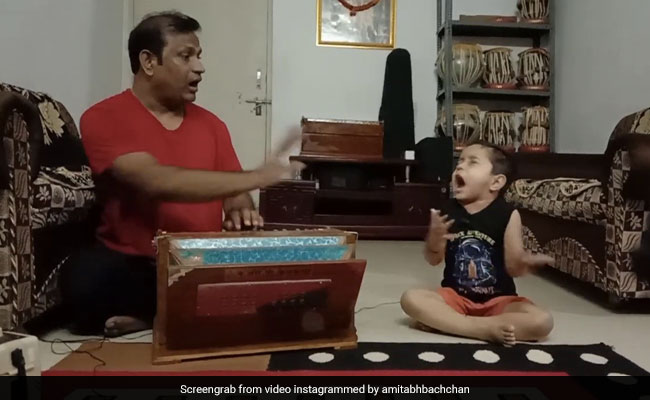 A little boy learns a classical song from his father in this delightful video.

A video of a little boy attempting to sing a classical song is being widely circulated on social media. The adorable video even caught the eye of actor Amitabh Bachchan, who posted it on Instagram this afternoon.

In the video, the boy and his father can be seen sitting together on the floor and practicing natyasangeet. The father plays his harmonium and sings a classical song, which his son tries to imitate. The adorable video shows the boy, aged 3, trying to get the sur, taal and lyrics right. At one point, he interrupts his father to say "Slow gaa na," - asking him to go slower. The father agrees and the singing resumes.

The video appears to have been first posted on YouTube by user Shreyanshree Jadhav, who informed viewers that it features a three-year-old learning classical music from his father, Tanhaji Jadhav. It began to gain viral attention after it was shared on Twitter by author and journalist Sandhya on Sunday.

While the video quickly went viral on Twitter, collecting over 3 lakh 'likes' and thousands of delighted comments, it also captured Amitabh Bachchan's attention. He posted it on Instagram and captioned it "Child is the Father of Man!"

Child is the Father of Man !

Within a few hours of being shared on Instagram, the video has garnered a whopping 1.3 million views and nearly 5,000 comments praising the child's effort.

"This is the most adorable, heart-touching and yet hilarious video I have seen in years," wrote one Instagram user.

"So sweet," another remarked.