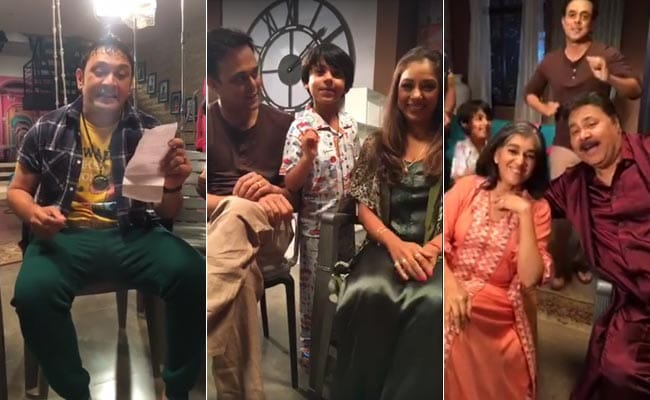 NEW DELHI: Cue in the collective yays and whoopies - Indian television's coolest sitcom is coming back after 11 years to a laptop, phone or tablet near you. Sarabhai vs Sarabhai is slated to return as a web series soon and the cast has already begun shooting together. After months of teasing us with videos from their get-togethers, the cast did a Facebook Live video from their new set last evening. And it's apparent from the video that the Sarabhais are well and truly back. Well, almost.

In the live video, posted on the Hotstar Facebook page, producer Jamnadas Majethia introduces everyone to the show's characters - most of them old and one new addition. So if you've missed Rosesh, his kavitas, his momma Maya, 'Narad Muni' Indu, Sahil and 'middle class' Monisha, here's your chance to revive some old memories. Fair warning, the video will make the wait for the show's return just a little harder.

You can rest assured that all the characters are just like their old selves. Only, they're all now seven years older. In fact, Rosesh even reads out a poem during the video. "Aaya aaya Sarabhai family phirse machane dhoom, sabki dhadkane lezim karegi dum dum pat pat dum," says Rajesh Kumar, the actor who plays Rosesh in the show. Ratna Pathak Shah, Satish Shah, Rupali Ganguly and Sumeet Raghavan, all react to the poem just like their respective characters would in the show.

Within 16 hours of being posted, the video has collected almost six lakh views and some 8,000 reactions. Take a look at the video below:

Hello from the Sarabhais!!

Promoted
Listen to the latest songs, only on JioSaavn.com
Tell us what you think of the video in the comments section below.

sarabhai vs sarabhaiSarabhai Vs Sarabhai returns