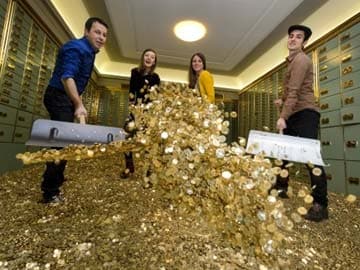 Basel: Fancy taking a dip in a sea of Swiss francs, or scooping up fistfuls of coins? Your wildest dreams could come true thanks to a sale with a political edge.

On sale via JamesEdition, a Sweden-based online luxury clearing house that matches sellers and bidders for anything from real estate to private jets, the vault and its contents have attracted a string of confidential offers, organiser Che Wagner told AFP.

The coins were earlier this year dumped in front of the Swiss parliament by Wagner and fellow campaigners seeking a minimum monthly government stipend of 2,500 Swiss francs for each of the country's eight million inhabitants, regardless of age and income.

Measuring almost 45 square metres (492 square feet), the vault is in a former bank in the northern Swiss city of Basel.

The building houses the campaigners who, using the famed Swiss system of direct democracy, mustered enough signatures to push for a plebiscite on the minimum stipend within the next three years.

The vault currently belongs to a member of the referendum committee, and the potential sale price has not been revealed.

The campaigners are organising the sale in order to fill their coffers for what is expected to be a tough referendum battle on the stipend issue.

"It's going to be an interesting campaign, and we'll need 10 million Swiss francs," said Wagner, 25.

"But we're not doing this for the money," he insisted, adding that he hoped the vault's buyer would open it to the public.

While critics dub the hand-out scheme far-fetched, the campaigners say it is high time for a radical rethink of how work and society function.

Promoted
Listen to the latest songs, only on JioSaavn.com
If it were to pass, the measure would cost an estimated 200 billion Swiss francs a year, which the campaigners say could be funded by a better share-out of social security, a reduction in salaries, and taxes.