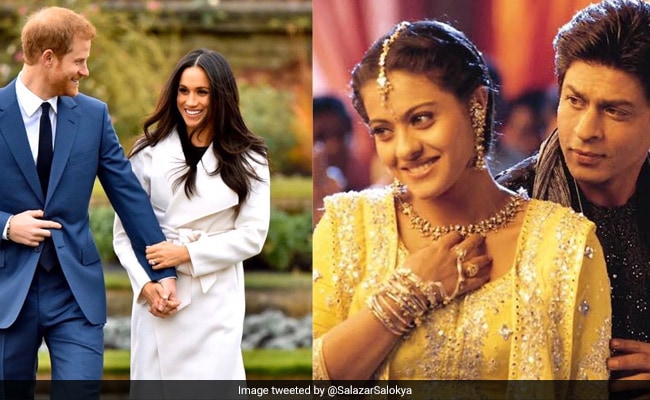 Prince Harry and Meghan's decision to step back as 'senior' royals - a move seen by many as the couple's attempt to distance themselves from the royal family - has generated shockwaves on social media. To many Bollywood fans, however, the storyline sounded quite familiar. Since the Duke and Duchess made their shock announcement on Wednesday, Twitter has been flooded with people reminded of the plot of Kabhi Khushi Kabhie Gham.

The Karan Johar movie - where the eldest son (played by Shah Rukh Khan) splits from his powerful family after marrying a woman of his choice - has cultivated a loyal fan following since its release. With news of Prince Harry and Meghan's decision to step back as senior royals, work to become financially independent, and split their time between UK and North America, these fans can't help but draw parallels to the storyline of K3G.

We collected some of the funniest royal family vs Raichand family tweets for you:

“The raichand family” ????????????facts bet you the queen goin off to Harry about parampara https://t.co/EFBvzmr3WZ

The Royal Family story is very much the story of Kabhi Khushi Kabhie Ghum #K3G#HarryandMeghanpic.twitter.com/cQacqjZmU3

People comparing Meghan-Harry to Rahul-Anjali's plot in K3G.
Yup, can totally imagining Will going to Canada to get back his brother, dancing with Kate to You are my Soniya. Charles and Camilla joining in for Bole Chudiyaan and oh, and the Queen dies. Plausible

Meghan and Harry's decision to leave Royal household is highly evocative of ace Bollywood director Karan Johar's 2001 opus Kabhi Khushi Kabhie Gham. The Megxit, as it is being called, mirrors the way in which Rahul and Anjali left the Raichand household. In this essay, I will...

On Wednesday night, the Duke and Duchess of Sussex said in a statement that they would be "stepping back" as senior royals, adding that they wanted to become financially independent. But the Queen and other members of the family were said to be "hurt" by their decision. According to some reports, the royal family only received the statement 10 minutes before it was released to the world.

Queen Elizabeth II has reportedly ordered all four royal households of the UK to find "workable solutions" to the crisis with Prince Harry and Meghan.