Remembering Irrfan Khan: Rajesh Khanna To Mithun, Actors Who Inspired Him As A Young Man

Irrfan Khan documented some of the "filmy influences" that shaped his life and career in a series of Instagram posts in 2017. 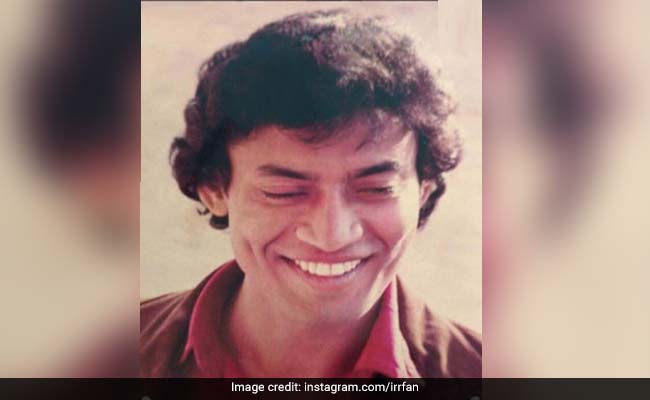 Actor Irrfan Khan died at the age of 53 in Mumbai.

Actor Irrfan Khan died on Wednesday in Mumbai's Kokilaben Dhirubhai Ambani Hospital. He was being treated for a colon infection and had been taken to the intensive care unit yesterday. One of India's finest actors, Irrfan Khan had battled a tumour for several months, returning to Mumbai only a few months ago after treatment in London. A statement released by his family said that Mr Khan spent his final hours "surrounded by his love, his family for whom he most cared about."

Irrfan Khan, who was last seen in Angrezi Medium, also starred in internationally acclaimed movies like JurassicWorld and Life of Pi.

The statement released by Mr Khan's family described him as "a man of few words", but he sometimes delighted his fans by giving them a glimpse of his life behind the scenes on Instagram. Irrfan Khan, who was born in Jaipur and struggled for years in the film industry before achieving fame, also documented some of the "filmy influences" that shaped his life and career in a series of Instagram posts in 2017. Take a look at the films and the actors that inspired him:

The everlasting popularity of the 1975 blockbuster Sholay inspired Irrfan Khan as well. In 2017, he shared an old black-and-white photograph which shows a young Irrfan Khan recreating the poster of Sholay with a friend.

This is our poster inspired by the #Sholay poster. #FilmyInfluence

Rajesh Khanna, often hailed as the first superstar of Indian cinema, charmed an entire generation of cinema-goers - Irrfan Khan among them. In his next Instagram post, Mr Khan shared another throwback photograph of a look inspired by Rajesh Khanna. He also revealed that someone had once told him that to become an actor, he must know how to ride horses. And so, he said, that whenever he rode a horse, he made sure his look would be inspired by Rajesh Khanna's.

"Hero toh banna hi tha!" he quipped while sharing the post, which he tagged #FilmyInfluence.

Somebody told me that to be an actor you must know horse riding … so whenever I went to ride (or learn to ride - which I didn't at that time), I made it a point that when I sat on the horse … my look would be inspired by Rajesh Khannaji …. ;) Hero toh banna hi tha! #FilmyInfluence

Horses - or the lack of them - was also the subject of another #FilmyInfluence post that the actor shared. Posting a photo that shows him and his two friends on donkeys, Mr Khan recalled an incident where he and his friends could not find horses and decided to make do with their close cousins - donkeys.

We were supposed to be riding horses… but we didn't find any horses toh we found these … ummm… donkeys. The guy on the right has a gun (fake of course) … Arif (on the left) didn't get anything toh usne hunter utha liya … and who we are threatening in the picture .. I have no idea ! #FilmyInfluence

In the series of six posts, Irrfan Khan also revealed that growing up, he wasn't allowed to watch too many movies - but the ones he did watch captured his imagination. He shared an old photograph that shows him holding a toy gun to friend, who lies on the ground pretending to be dead.

The pic, clearly influenced by countless such scenes in Bollywood movies, came with the caption: "Though we weren't allowed to watch cinema we used to watch a few movies .. and take pictures and weave a story around it... it would capture our minds ... and it would be upto us and you to decipher what these stories would be! #FilmyInfluence."

Though we weren't allowed to watch cinema we used to watch a few movies .. and take pictures and weave a story around it… it would capture our minds … and it would be upto us and you to decipher what these stories would be! #FilmyInfluence Look at the guy - he is supposed to be dead. But he is smiling!

Another movie scene recreation from the actor's growing years, captured in black and white:

In the posts, Irrfan Khan said that growing up, he wanted his hair to look like Mithun Chakraborty's. "I used to go to a barber shop and tell them ke mere baal seedhe kar do (straighten my hair) .... because my hair were curly and kind of stiff .." he had written while sharing a throwback photo.

I wanted my hair to be like #MithunChakraborty, so I used to go to a barber shop and tell them ke mere baal seedhe kar do …. because my hair were curly and kind of stiff .. Aur kya hota tha ke first day my hair would look good .. just like Mithuns, but after that they would turn into a bird's nest ! #FilmyInfluence This picture is Day 1 just so you guys know ;)

"I trust, I have surrendered'; These were the some of the many words that Irrfan expressed in a heart-felt note he wrote in 2018 opening up about his fight with cancer. And a man of few words and an actor of silent expressions with his deep eyes and his memorable actions on screen. It's saddening that this day, we have to bring forward the news of him passing away. Irrfan was a strong soul, someone who fought till the very end and always inspired everyone who came close to him. After having been struck by lightning in 2018 with the news of a rare cancer, he took life soon after as it came and he fought the many battles that came with it. Surrounded by his love, his family for whom he most cared about, he left for heaven abode, leaving behind truly a legacy of his own. We all pray and hope that he is at peace. And to resonate and part with his words he had said, 'As if I was tasting life for the first time, the magical side of it'."