The meme is based on actor Daisy Shah's "Our business is our business... none of your business" dialogue from the Race 3 trailer 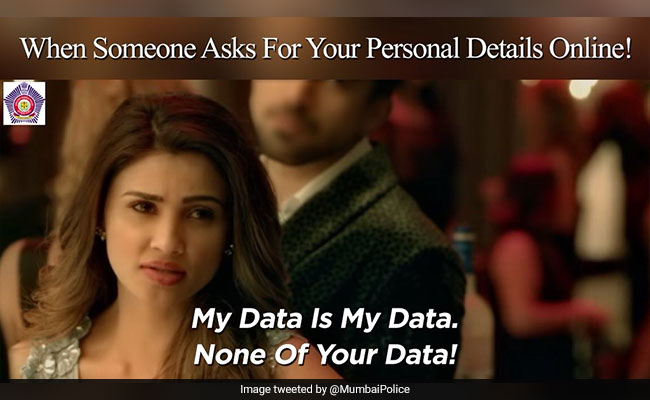 Mumbai Police's message, delivered in a hat-ke style is a hit.

Unless you have been living under a rock or taken a social media hiatus, you've seen a few of those hilarious Race 3 memes. The trailer of Salman Khan's soon-to-be released film has been raking in the views on YouTube ever since it was dropped about a week ago. And while it still makes it on the video sharing site's trending list, many on Twitter haven't been able to stop themselves from memifying the many, many meme-worthy moments from the trailer. Among the memes that top the list is actor Daisy Shah's "Our business is our business... none of your business" dialogue from the Race 3 trailer.

Scroll through your Twitter or Instagram feed and chances are you'll see quite a few jokes on the dialogue. And joining the scores of tweeple posting the meme is none other than Mumbai Police.

In a tweet posted earlier today, Mumbai Police tweeted about an important message on cyber security. But as always, the message was delivered in a hat-ke manner. Mumbai Police used the Race 3 meme to warn about not sharing personal information online.

Mind your own data to make sure that no one else takes advantage of it to beat you in the #RaceOfSafetypic.twitter.com/WJ4ADZEl1a

Like their earlier messages, delivered through cleverly-worded tweets and the use of catchy hashtags, this tweet too is winning Twitter. Since being posted about two hours ago, the tweet has collected over 2,400 'likes' and more than 1,000 retweets.

This isn't Mumbai Police's first rodeo - their Twitter handle has more often than not won the love of tweeple thanks to their perfectly-timed, topical and hilarious tweets on important campaigns. The handle has earlier used films and TV shows like Avengers: Infinity War, Baahubali, Game of Thrones and more to deliver some witty messages on safety. Race 3 is the latest addition to the list.

Promoted
Listen to the latest songs, only on JioSaavn.com
Race 3 is directed by Remo D'Souza and along with Salman Khan, Jacqueline Fernandez and Daisy Shah, also features Anil Kapoor, Bobby Deol and Saqib Saleem. The film will hit theatre screens this Eid on June 15.

Here are some of the best memes and jokes inspired by the Race 3 trailer.Click for more trending news