From Rahul in 'Darr' to Joffrey Baratheon in 'Game of Thrones', here's what would happen if these villains descended on the Maximum City. 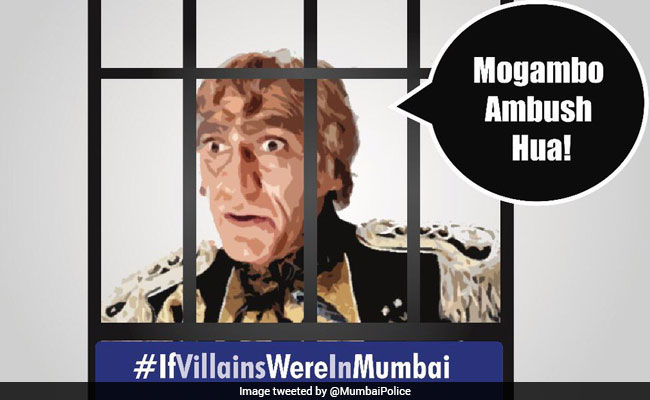 Momgambo is one of the many Bollywood villains to be included in Mumbai Police's latest campaign.

Mumbai Police is on an intense social media drive to deter criminals - and to do so, they are telling them what would have happened to fictional and reel-life criminals if they had actually existed in Mumbai. (Spoiler alert: Most of them would have ended up behind the bars). Their latest social media campaign makes use of the hashtag 'If Villains Were In Mumbai' to imagine what would have happened to everyone from Mr India's Mogambo to Ram Lakhan's Kesariya Vilayati, had they been in Mumbai.

Making sure no games can be played with the safety of Mumbai #IfVillainsWereInMumbaipic.twitter.com/2VgxkxTLUe

Sending all the bad men where they deserve to be #IfVillainsWereInMumbaipic.twitter.com/sUchyPl7DA

Here is what people are saying about Mumbai Police's 'if villains were in Mumbai' hashtag:

Mumbai Police tweets got the sass. Let the villains know it was you @MumbaiPolice Great going!! https://t.co/7QVsLFE58H

This isn't the first time that Mumbai Police's Twitter game has won them admirers. Just a month ago, their tweet calling out actor Varun Dhawan for not following traffic rules had won them applause.