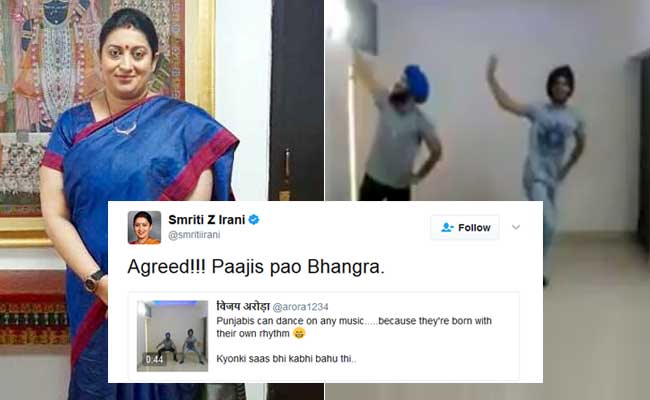 It all started when a Twitter user tagged Union Cabinet Minister of Textiles Smriti Irani in the video.

NEW DELHI: Chances are, when someone sings the Kyunki Saas Bhi Kabhi Bahu Thi title track, images of Tulsi - the character, tulsi - the plant, Baa and all the different Mihir's will flash through your mind. No one would imagine a full-on dance performance happening on the track right? Wrong. Someone envisioned exactly that and put it up on the Internet. A video on Twitter shows two punjabi mundas putting on an awesome bhangra routine to a remixed version of the track. And it's so good, former Kyunki protagonist and current Union Cabinet Minister of Textiles Smriti Irani tweeted about it.

It all started when a Twitter user tagged Ms Irani and producer Ekta Kapoor in the video. "Punjabis can dance on any music because they're born with their own rhythm," the Twitter user said in his tweet.

Next thing you know, the minister herself replied to the tweet:

The video begins with the paajis, as Ms Irani calls them, dancing to the regular track. The song eventually turns into a party remix. We're not sure how this came about but it definitely begs to be watched.

Punjabis can dance on any music.....because they're born with their own rhythm

Ms Irani's tweet has received some 700 'likes' and about 120 retweets since being tweeted earlier today.

Promoted
Listen to the latest songs, only on JioSaavn.com
Tell us what you think of the video and Ms Irani's tweet using the comments section below.