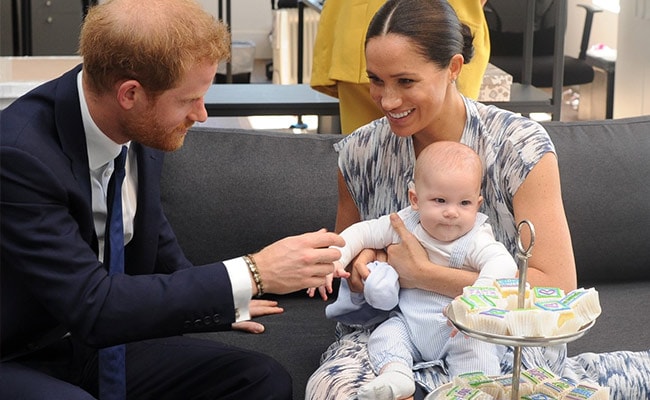 The Duke and Duchess of Sussex have revealed details of life with their six-month-old son, Archie. The couple met military families at Windsor's Broom Farm Community Centre two days ago, reports Daily Mail. It was while interacting with the families that Prince Harry and Meghan revealed that at the age of six months, Archie is beginning to crawl and has his first two teeth.

BBC reports that one mother who was present at the event described Meghan as a "normal mum" who discussed weaning and crawling with them.

The Duchess of Sussex was filmed speaking about Archie's teething as she greeted children outside the community centre. "Look at all your good teeth," she said to one smiling toddler.

"Archie just got two teeth. Two tiny ones, right there," she then added, pointing to the middle of her own bottom row.

Prince Harry, meanwhile, praised the military families and service personnel who often stay away from home, saying: "I can't imagine what it's like to miss so much as they change so quickly."

Yesterday, The Duke and Duchess surprised their neighbours in Windsor at a coffee morning for military families in a community centre located in the heart of the Army housing estate. Every year during the month of November we pause to remember and honour all those who have served their country here in the UK, across the Commonwealth and around the world. Their Royal Highnesses also wanted to show support for the families of service personnel who are currently deployed overseas. As we lead up to Remembrance Sunday, The Duke and Duchess of Sussex will join Her Majesty The Queen and other Members of the Royal Family at various commemoration events, including the Festival of Remembrance at the Royal Albert Hall and the Cenotaph. During the visit yesterday, Their Royal Highnesses met with young families who shared their experiences as parents and as couples who are often apart from their loved ones for months at a time. A reminder that a life of service does not simply describe the person wearing the uniform, but the entire family. #Remembrance #Lestweforget

Archie's birth in May had grabbed headlines around the world, generating a lot of interest. More details about the royal baby were revealed to Us Weekly by a source two days ago. "He's a strong baby and you can tell he's super smart," the source was quoted as saying. "He can sit up without support and roll over, and he's almost crawling. He can't talk yet, but he's trying!"